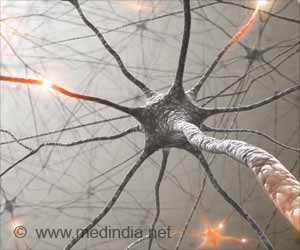 New unique population of motor neurons and associated microglial cells were identified in the spinal cord of patients who died of ALS (amyotrophic lateral sclerosis) by the researchers at the University of Illinois at Chicago.

Amyotrophic lateral sclerosis, or ALS, is an adult-onset neurodegenerative disease that causes paralysis and ultimately death when the nerves enervating the lungs cease to carry the signals needed for breathing. The disease has what is called a "focal onset," where paralysis starts with an arm or a leg and spreads throughout the body as motor neurons in the spinal cord and brain die off.

Study has found an association between high body mass index and a lowered risk of amyotrophic lateral sclerosis.
Advertisement
‘Identifying new safer drugs for ALS is the need of the hour as the deadly disease have only very few treatment options. Novel and unique subtypes of motor neurons which were identified in ALS patients could act as the potential new drug target.’
Read More..
Tweet it Now


Early diagnosis of the disease has not been possible because of a lack of known biomarkers indicative of ALS, but scientists believe that cellular changes within spinal neurons occur before symptoms are detectable, and these changes could serve as useful biomarkers that can aid in earlier diagnosis.


When symptoms of ALS begin with the paralysis of an arm or a leg, it means that the disease has affected the motor neurons that enervate that arm or leg and which originate in a specific region along the spinal cord. For example, neurons that innervate the arm originate in the upper part of the spinal cord. In ALS, where symptoms first appear in the arm, the motor neurons in the upper spine region die off. Motor neurons above and below that region begin to die off next as the disease spreads up and down the spine, causing paralysis of other parts of the body.
Advertisement
The researchers, led by Fei Song, associate professor of neurology and rehabilitation in the UIC College of Medicine, found that patients with focal-onset ALS had different types of neurons in areas of the spinal cord that are less affected by the disease compared with patients without neurological disorders. They also found that spinal neurons in less affected regions of patients who died of focal-onset ALS were associated with cells called microglia and astrocytes. They report their findings in the journal Neurobiology of Disease.

"Since there must be cellular changes occurring in spinal cord regions adjacent to areas where the disease has clearly affected motor neurons in the spine, we wanted to look at neurons from these adjacent areas to determine if they are different from healthy tissue," Song said. "The debilitating disease has no effective treatment to stop the disease progression and there are only two medications that can prolong patient survival by a few months. So, new drug targets, especially ones that could be given in the earlier stages of the disease, are very much needed."

Song had worked with Dr. John Ravits, professor of clinical neurosciences at the University of California, San Diego, on ALS research in the past. Ravits sees patients with ALS and runs a biorepository that includes nerve tissue from patients who died of ALS and consented to have their nerve tissue collected after death.

Ravits published a paper in 2010 analyzing the expression of genes in spinal motor neurons taken from 12 patients whose ALS started focally compared with nerves of patients without neurological disorders. Motor neurons were collected from less affected regions of the spinal cord where the tissue was assumed to be in the earlier stages of disease.

While significant differences were found, Song wanted to reanalyze the genetic data using a new technique that could shed light on different cell types that may have been present in the samples collected by Ravits. Song and colleague Fabien Dachet, a research specialist with bioinformatics expertise in the UIC department of neurology and rehabilitation, applied a novel bioinformatics analysis to the genetic data.

"When we examined the data, it was clear that the mixture of cells from the ALS patients was very different from patients with no neurodegenerative disease," Song said.

"We found a novel and unique subtype of motor neurons in these patients never before reported," Song said. "Now that we have identified new subtypes of motor neurons and microglia present in ALS patients, we can begin to further study their roles in contributing to disease progression."