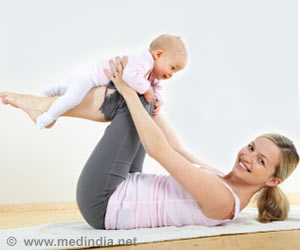 New moms might need less structured and more flexible workout programs to support and ease back into exercise after giving birth, reports a researcher from Kansas State University.

"When a mom has survived the first several weeks of having a new baby and is ready to start adding exercise and all of its benefits, back into her life, a more flexible approach works better than a specific regimen," said Emily Mailey.

Children born to older mothers today are more likely to perform better in cognitive ability tests than those born to younger mothers.
Advertisement
‘New mothers who exercise or work out are more patient and more energetic.’

That's according to Mailey's study. "Specific exercise programs can seem like an insurmountable barrier to new moms," Mailey said.


"The results of this study suggest that the idea of encouraging new moms to fit in any kind of activity any way they can might be the best approach for easing back into exercise after giving birth."

Pregnancy in the United Kingdom has never been safer, say scientists from King's College London writing in the latest edition of The Lancet.
Advertisement
As part of the intervention study, Mailey hosted workshops for mothers who had given birth between six weeks to 12 months before the start of the study to discuss strategies for increasing physical activity.

All participants wore accelerometers for a week to measure activity before the workshops, immediately after the workshops and six months later. Mailey also specifically measured mothers' perceptions of barriers to exercise.

"Even people who were really active before having kids tend to decrease their physical activity after having kids because they prioritize the baby's needs first," Mailey said. "In the workshops, we talked specifically about guilt and the idea that doing something for yourself is not selfish, it actually might help you be more patient or have more energy for your kids."

Moms that were in the flexible group that chose their favourite exercise, increased physical activity slightly more than the regimented running group over six months, but all moms became more proficient at planning exercise into their lives as new moms and perceived time and guilt to be more surmountable barriers.

"It's difficult for a mom to get out of this mindset that her main role is to care for her family," Mailey said. "In the workshops, we talked about how that didn't necessarily need to be at odds with exercising. Being active might actually help moms be better equipped to care for their family by enjoying some of the mental health benefits of exercise."

Time and type of physical activity may have been why the flexible approach had a slight increase in prolonged physical activity. The exercise shouldn't be something the person hates to do, Mailey said.

In the flexible group, she discussed the importance of finding an activity that the moms enjoyed doing and talked about how that activity can be broken into three 10-minute bouts of activity if needed instead of one 30-minute session a day. She also advised moms in the flexible group to set realistic measurable goals.

For example, the 10,000 steps guideline may be too much for new moms. Overall, the workshops gave mothers support and strategies to overcome barriers, but Mailey also tried helping mothers see exercise differently.

"Modeling healthy behaviors for our children and talking positively about exercise will help them have a healthy view of exercise, what it is and what it is for," Mailey said. The study is published in the Journal of Health Psychology.

Cancer kills as many as 264 children per week in the country. As many as 13,726 deaths due to childhood cancer occurred in India in 2010.
Advertisement
<< Gastrointestinal Link Found For Gulf War Illness (GWI)
India Needs More Trained Surgeons To Combat Osteoarthritis >>

Babies Born to Mothers With Gestational Diabetes Have Poor Outcomes

When compared to non-diabetic mothers, babies born to mothers with gestational diabetes are at an increased risk of adverse outcomes.

Diaphragmatic Hernia Find a Doctor Turmeric Powder - Health Benefits, Uses & Side Effects Loram (2 mg) (Lorazepam) The Essence of Yoga Drug Side Effects Calculator Nutam (400mg) (Piracetam) Pregnancy Confirmation Calculator Hearing Loss Calculator A-Z Drug Brands in India
This site uses cookies to deliver our services.By using our site, you acknowledge that you have read and understand our Cookie Policy, Privacy Policy, and our Terms of Use  Ok, Got it. Close
×