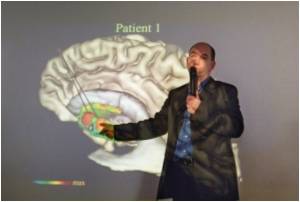 Scientists have developed a new non-invasive method to track the progression of Huntington's disease.

Huntington's disease is a fatal, inherited neurodegenerative disorder caused by a mutation in the gene encoding huntingtin. Expresion of mutant huntingtin (mHTT) protein is correlated with the onset and progression of the disease and new therapies are being developed to reduce the expression of mHTT. In order to evaluate these new therapies, researchers need to be able to quantify the amount of mHTT in a particular patient; however, non-invasive quantification of mHTT isn't currently possible. In this issue of the Journal of Clinical Investigation, researchers led by Sarah Tabrizi at University College London report that mHTT can be detected in immune cells isolated during a normal blood draw. mHTT levels were significantly correlated with disease symptom severity, indicating that this test could serve as a non-invasive biomarker for Huntington's disease.

Know about Nervous system, which consists of network of specialized cells that transmits the signal between different parts of the body.
Advertisement
<< Alzheimer's Cure Still Remains a Mystery
Use Catchy Vegetable Names to Make Food Sound More Appealin... >>

How to Best Treat Involuntary Movements in Huntington's Disease

Vent Forte (Theophylline) Blood Donation - Recipients Accident and Trauma Care Post-Nasal Drip Sanatogen The Essence of Yoga Indian Medical Journals Hearing Loss Calculator Selfie Addiction Calculator Sinopril (2mg) (Lacidipine)
This site uses cookies to deliver our services. By using our site, you acknowledge that you have read and understand our Cookie Policy, Privacy Policy, and our Terms of Use