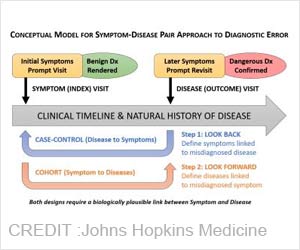 A new method Symptom-Disease Pair Analysis of Diagnostic Error (SPADE) has been developed that helps quantify and monitor diagnostic errors and can prevent disability and death from misdiagnosis.

A Johns Hopkins Armstrong Institute for Patient Safety and Quality researcher has developed this new approach and has been featured in a paper published in BMJ Quality & Safety.

Advertisement
‘SPADE (Symptom-Disease Pair Analysis of Diagnostic Error) helps measure the causes of disability and death that occur due to the diagnostic error such as vascular events, infections, and cancers.’

Various research studies reveal that an estimated 12 million Americans are affected each year by diagnostic errors, with one in three errors leading to serious patient injuries, including disability or death.


"We know diagnostic errors are a big problem, but we currently have no way of operationally measuring them," says David Newman-Toker, M.D., Ph.D., director of the Armstrong Institute Center for Diagnostic Excellence. While some research was previously done by his and other groups on a smaller scale, "This is the first real description of a method that could be used broadly across a range of conditions to operationally measure diagnostic errors and associated bad outcomes so that we can track our performance and see whether our interventions are making a difference," Newman-Toker says.
Advertisement
Many current methods of measuring diagnostic errors rely on labor-intensive medical record reviews by hospital staff members. The SPADE method mines large, readily available databases with hundreds of thousands of patient visits, using specific algorithms to look for common symptoms prompting a doctor visit and then pairing them with one or more diseases that could be misdiagnosed in those clinical contexts.

The method uses statistical analyses to identify critical patterns that measure the rate of diagnostic error and could be incorporated into diagnostic performance dashboards.

"Using SPADE, we can measure how often a patient comes to the hospital with dizziness, is mistakenly told it's a benign ear condition, is sent home, and comes back with a big stroke. We can also measure how often a patient comes to a clinic with a fever, is told it's a viral infection, but is later admitted to the hospital with bacterial sepsis," says Newman-Toker, who is also a professor of neurology at the Johns Hopkins University School of Medicine. "And being able to do that using big data is an important innovation for diagnostic quality and safety."

Newman-Toker also believes SPADE, in turn, will lead to improved patient outcomes. "Many quality measures focus on hospital processes, rather than patient outcomes. But it's not about treating the charts, it's about treating the patients. At Johns Hopkins, we focus on tracking serious adverse outcomes, such as stroke or heart attack. These measures will matter to patients," he says.

SPADE will work best with acute and subacute diseases for which a misdiagnosis that leads to hospitalization, disability or death is likely to occur within six months to a year. Further research is needed to validate SPADE across a wider range of symptoms and diseases.

The method may not ultimately be applicable to all diseases, especially chronic conditions, but Newman-Toker expects it will work for what he calls "The Big Three" causes of disability and death from diagnostic error: vascular events, infections and cancers.

Thinking toward the future, Newman-Toker understands that physician and hospital leadership "buy-in" relating to tracking diagnostic errors may take time. However, he believes SPADE could eventually be among hospitals' publicly reported measures.

"Patients will have the opportunity, for the first time, to see how their hospital is performing on diagnosis and ask themselves, 'Do I want to choose a hospital that has fewer misdiagnosis-related deaths?'" Newman-Toker says. "And that is a step towards patient empowerment in diagnosis that has never existed before."

Source: Eurekalert
Advertisement
<< Marijuana Use Does Not Correlate With Lower Chances of Getti...
Here's How Your Brain Maintains Balance >>