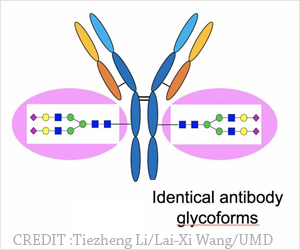 Antibodies are the key players of our immune system. They are specialized, Y-shaped proteins which are found to be attached to the bacteria and viruses. Antibodies mainly block the pathogen's activity directly or may signal the immune system's cells to destroy the invader.

They also have the ability to target invaders for destruction, This may allow antibodies to be a target for cancer and disease therapies.

The antibody drug found to provide new way to prevent viral infection in people who are at a high risk for HIV.
Advertisement
‘Standardizing the sugar groups can be a new method to create better therapeutic antibodies for treating cancer, inflammation and other diseases.’

But not all antibodies are created equal. Due to subtle but important differences in the structure of their sugar groups, two otherwise identical antibodies that attack the same invader might not be equally good at recruiting immune cells to finish the job. Researchers from the University of Maryland and Rockefeller University have previously developed a method to modify an antibody's sugar group structure, which opened the door for biochemists to create antibodies with consistent sugar groups.


The researchers have now taken their method a step further, by determining which specific sugar combinations enhance--or suppress--an antibody's ability to signal the immune system to attack an invader. The results, published in the March 13, 2017 early online edition of the Proceedings of the National Academy of Sciences, are an important step toward the development of highly effective antibodies to fight cancer and other diseases.

The antibodies were derived from people with a rare autoimmune disorder, called autoimmune polyendocrine syndrome type 1 (APECED).
Advertisement
An antibody's ability to send killer signals depends on the configuration of sugar chains attached to the protein. In naturally occurring antibodies, these sugar chains have a lot of variability. Even in antibodies currently used for disease therapy, a given dose might contain a wide variety of antibody variants, also known as "glycoforms," distinguished by their sugar groups.

Although prior methods tried to sort out these glycoforms and collect the most effective ones, these methods are time-consuming, expensive and not 100 percent effective. The method used in the current study enables the researchers to create a given antibody with identical glycoforms using biochemical techniques. Each glycoform can then be tested independently to see whether it enhances or suppresses the immune response.

"Our first major step forward was to develop a method to produce homogeneous glycoforms," said Lai-Xi Wang, a professor of chemistry and biochemistry at UMD. "With this, we can now look at how individual different sugars affect the properties of antibodies. Until this study, we didn't have an efficient way to know how individual sugars in various glycoforms affect suppression or activation of the immune response."

Most therapeutic antibodies on the market are designed to treat cancer and autoimmune diseases. For example, Rituximab is an antibody-based drug used to treat lymphoma, leukemia and rheumatoid arthritis. Rituximab and other similar antibody drugs are usually produced in cultured cell lines.

"These processes are not optimized at all. There is no easy way to control glycosylation," Wang said. Glycosylation is the process by which sugar groups are added to a protein such as an antibody. "Our method could be used to improve antibodies already on the market because it modifies the antibodies directly instead of working at the genetic level."

Wang's group, which specializes in the biochemistry of protein glycosylation, developed the methodology to modify the antibody sugar groups. They partnered with Jeffrey Ravetch's group at Rockefeller University, which specializes in immunology and animal models, to test the effects of various glycoforms on the immune response. The new findings will help guide the development of future antibody-based therapeutics.

"Our method would be generally applicable because it can be used on a wide variety of antibodies," Wang said. "It's an important step forward in the effort to engineer therapeutic antibodies that can target specific cancers, inflammation and other diseases. Soon we will be able to build customized antibodies."

The alternative administration of a drug to the tumor results in fewer adverse events in patients, as compared to injections into the blood stream.