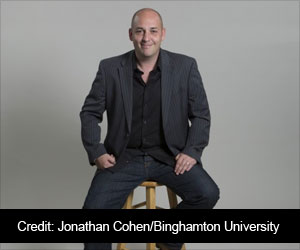 A new method has been developed by researchers at Binghamton University, State University of New York to measure the limit to which human skin can be stretched, which could lead to a new means to grow skin.

"Surgeons use a variety of techniques to grow skin for tissue expansion procedures designed to grow skin in one region of the body so that it can be auto-grafted on to another site [sometimes used for burn victims]," said Guy German, assistant professor of biomedical engineering within the Thomas J. Watson School of Engineering and Applied Science at Binghamton University. "This procedure stretches the skin, typically, by inflating a balloon with air or silicone under the surface. Skin grows more in regions where it is stretchedduring pregnancy, for instancebut stretch it too much and the tissue might break. Our predictive technique could be employed in this field as a method of predicting the limit to which the skin could be stretched."

Engineers have created a flexible, skin-like material that has been able to detect pressure and also transmit a signal to a component of the nervous system.
Advertisement
‘Using the new method, scientists found that cracks in the skin are not straight; instead they follow topographical ridges of skin, which have triangular patterns.’

The outermost layer of skin, the stratum corneum, regulates water loss from the body and protects underlying living tissue from germs and the environment, in general. It is pretty tough, protecting the body from extreme temperatures, rough surfaces, and most paper edges.


"Most people think the skin is smooth and flat just like a Photoshopped advertisement. It isn't," said German. "If you look at the back of your hand, the skin has small triangular patterns on it. These shapes are caused by small canyons in the skin. Those canyons act just like notebook perforations when you tear a page out; they are weak points. We wanted to see how these topographical features acted as weak points of the skin."

Researchers found that the use of sleep aids and skin creams was higher than expected among the medications that astronauts used on spaceflight missions.
Advertisement
The study was a fundamental one and the initial intention was not to solve tissue expansion issues, but it did touch on four major points: The results could help create new topical medical creams, soaps and cosmetic products to go along with helping burn victims.

The safety razor company Schick funded parts of the research. Graduate students Xue Liu and Joseph Cleary were co-authors of the work.

The paper, "The global mechanical properties and multi-scale failure mechanics of heterogeneous human stratum corneum" was published in Acta Biomaterialia.

A team of scientists at Stanford University has developed a tactile sensing system which could produce the human sensation of touch.
Advertisement
<< Overall Mental Health Satisfaction Rate On The Decline In Th...
Researchers Use X-rays to Study the Structure of Edible Fats >>

Calorie restriction, a reduction in calorie intake without malnutrition, has been found to slow down the ageing process in several animal models from worms to mammals.

Pregnancy Confirmation Calculator The Essence of Yoga Post-Nasal Drip Vent Forte (Theophylline) Sinopril (2mg) (Lacidipine) Nutam (400mg) (Piracetam) Calculate Ideal Weight for Infants Iron Intake Calculator Selfie Addiction Calculator Drug Side Effects Calculator
This site uses cookies to deliver our services.By using our site, you acknowledge that you have read and understand our Cookie Policy, Privacy Policy, and our Terms of Use  Ok, Got it. Close
×