New Mechanism Has The Potential To Treat Obesity 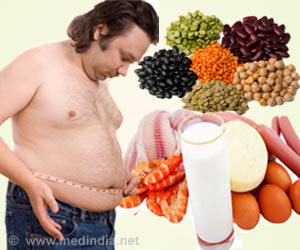 A new mechanism that regulates obesity is being discovered by scientists in a recent study. The study shows that this new mechanism can potentially be targeted to treat obesity.

Senior author of the study Makoto Fukuda said, "It's well known that the brain is involved in the development of obesity, but how a high-fat diet changes the brain so it triggers the accumulation of body fat is still unclear." The team studied the mouse Rap1 gene, which is expressed in a variety of tissues, including the brain where it is involved in functions such as memory and learning. Little was known, however, of the role brain Rap1 plays in energy balance.

Specific types of high-fat diets, based on corn or coconut oils, may increase risk of tumor formation in intestinal cancer.
Advertisement
‘It's well known that the brain is involved in the development of obesity, but how a high-fat diet changes the brain so it triggers the accumulation of body fat is still unclear.’

To explore the role Rap1 plays in a mouse model, the scientists selectively deleted the Rap1 gene in a group of neurons in the hypothalamus, a region of the brain that is involved in regulating whole-body metabolism. The scientists had two groups of mice. In one group, the mice were genetically engineered to lack the Rap1 gene, while the control group had a functional Rap 1 gene.


Then, the scientists fed the mice in both groups a high-fat diet in which 60 percent of the calories came from fat. As expected, the control mice with a working Rap1 gene gained weight, but, in comparison, the mice that lacked Rap 1 had markedly reduced body weight and less body fat. Interestingly, when both groups of mice were fed a normal diet, both showed similar weights and body fat. The scientists then looked closer at why the mice lacking the Rap1 gene had not gained weight despite eating a high-fat diet. "We observed that the mice lacking Rap1 were not more physically active.

Fish oil supplements prevent or reverse the harmful effects of a high-fat diet and could be effective in preventing obesity and type 2 diabetes.
Advertisement
However, they ate less and burned more body fat than mice with Rap1," said Fukuda. Adding, "These observations were associated with the hypothalamus producing more of a hormone that reduces appetite, called POMC, and less of hormones that stimulate appetite, called NPY and AgRP." These mice also had lower levels of blood glucose and insulin than controls. The scientists also were interested in studying whether leptin changed in mice lacking Rap1. Leptin, the 'satiety hormone' produced by fatty tissue, helps regulate body weight by inhibiting appetite. Obese people, however, do not respond to leptin's signals of satiety, and the blood levels of leptin are higher than those in non-obese people. Leptin resistance is a hallmark of human obesity.

Mice that lacked Rap1 and ate a high-fat diet, on the other hand, did not develop leptin resistance; they were able to respond to leptin and this was reflected in the hormone's lower blood levels. The team also tested the effect of inhibiting Rap1 with drugs instead of deleting the gene on mice on a high-fat diet. The scientists inhibited RAP1 action with inhibitor ESI-05. "When we administered ESI-05 to obese mice, we restored their sensitivity to leptin to a level similar to that in mice eating a normal diet. The mice ate less and lost weight," he said.

The scientists have shown a new mechanism by which the brain can affect the development of obesity triggered by consuming a high-fat diet. Consuming a high-fat diet results in changes in the brain that increase Rap1 activity, which in turn leads to a decreased sensitivity to leptin, and this sets the body on a path to obesity. "This new mechanism involving Rap1 in the brain may represent a potential therapeutic target for treating human obesity in the future," said Fukuda. The study appeared in Cell Reports today.

Children of obese mothers have a higher risk of obesity and metabolic disorders. Diet-related epigenetic effects may also play a causal role in this.
Advertisement
<< Mixing Cuisines can Make Your Meal More Enjoyable to Eat
Men are Getting Inquisitive About Grooming >>

Evidence is emerging that RBCs play an important role in atherosclerosis development, binding pro-inflammatory proteins that cause dysfunction in the endothelium.