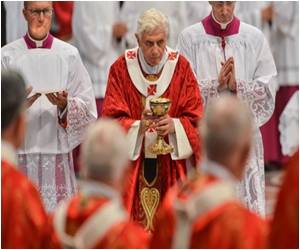 A revamped version of its Latin-language journal "Latinitas" was presented by the Vatican as it tries bid to make the dead language still used in the Catholic Church accessible to a wider audience.

The first issue of the new twice-yearly magazine includes a preface written by Pope Francis, whose new Twitter account in Latin -- "Papa Franciscus" -- has reached more than 180,000 followers.

"The aim is to highlight the glorious tradition behind us that has to be preserved and re-launched," Cardinal Gianfranco Ravasi, head of the Vatican's culture department, said at the event.


The pope's predecessor, Benedict XVI, last year set up a special pontifical council known as "Academia Latinitatis" to spread learning in Latin in one of his last acts as pope before resigning.
Advertisement
Ivano Dionigi, rector of Bologna University and head of the academy, also said at the Vatican presentation: "Latinitas is an unbeatable logo".

One of the participants in the discussion said Latin was "like a software for our brains".

Despite being an unofficial common language of the Roman Catholic Church, few clerics actually speak or read Latin and Ravasi said some concessions had been made in the new magazine for non-speakers.

"It is not all in Latin. There are a few articles in Italian and in French," he said, adding: "This is not intended to be an artificial way of recuperating Latin for the modern world."