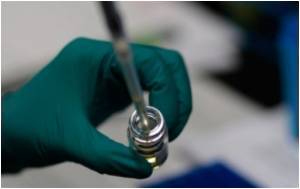 University of North Carolina and Vanderbilt University researchers have identified a novel live vaccine method for SARS and coronaviruses. They have found that accelerating the rate of mutations cripples the virus's ability to cause disease in animals. In addition, they say this finding may allow scientists to explore a new option for creating safer live vaccines.

A collaborative study, published Nov. 11 in Nature Medicine, demonstrates a SARS-coronavirus, altered to lack the ability to "proofread" (correct mistakes in replication), begins to mutate much more rapidly and becomes unable to cause disease in mouse models. In effect, the alteration creates a profoundly weakened or attenuated SARS virus.

This work may offer reassurance at a critical time. Public attention was recently heightened regarding a novel human coronavirus that sickened at least two with respiratory and kidney disease, killing one in the Middle East. The SARS outbreak in 2002 and 2003 caused 50 percent mortality in older adults. A rapid and effective international response ended the outbreak in just four months. The final tally: 8,422 cases of SARS, resulting in 916 deaths.


"We originally thought that the virus might find a way to fix the mutations we engineered or work around them as viruses often do. That didn't happen, and in this case, the attenuated viruses replicated well enough and long enough to generate a protective immune response, even in immunocompromised animals, so it works wonderfully as a vaccine in an animal model," said Rachel Graham, Ph.D., a research associate at UNC, who led the research.

A Promising Live Vaccine Against Tuberculosis Enters Trial in Germany

In the first phase of clinical trials in Neuss, Germany a promising live vaccine against tuberculosis has begun safety testing on volunteers.
Advertisement
The study is the culmination of more than a decade of collaboration between the laboratories of Mark Denison, M.D., Craig-Weaver Professor of Pediatrics and professor of Pathology, Microbiology & Immunology at Vanderbilt University School of Medicine, and Ralph Baric, Ph.D., professor of Microbiology, Immunology and Epidemiology at the University of North Carolina at Chapel Hill's Gillings School of Global Public Health. The researchers' aim is to better understand how coronaviruses, which also cause the common cold, evolve and spread between species.

Denison's lab developed the attenuated SARS virus by disabling a unique exoribonuclease (or ExoN) protein, referred to as a proofreading protein. Previous Vanderbilt studies had shown that disabling ExoN knocks out the virus's ability to correct mistakes, increases mutations twentyfold, and stops its ability to cause disease, at least in the lab setting. Graham, formerly a graduate student in Denison's lab, was able to continue the work in animal models as a postdoctoral scientist in Baric's lab.

Coronaviruses are RNA viruses known to have the largest genomes in the RNA viral world. It is now understood that the ExoN proofreading protein allows coronaviruses to maintain their expanded genomes, with many proteins evolved to help them survive and spread. But deactivation of ExoN creates a particularly enticing potential approach to vaccine design.

"Live vaccines in general confer broader and longer-lasting immunity, but the risk of live vaccines is they could potentially revert back to virulence as happened with the live polio vaccine in immunocompromised people," Baric said. "Our evidence is exciting because a more permanently attenuated virus might be safer. We believe that related approaches can be applied to other important human and animal viruses, resulting in safer vaccines."

To test the likelihood of reversion to virulence, researchers allow a virus to grow in a host that lacks immunity. In the current study, even in very young, very old and immunocompromised animals, the virus did not kill and could persist for a long time without showing signs of a return to virulence.

"In contrast to science fiction, where mutations are evil and endanger the world, our studies demonstrate that viruses have evolved to tightly control their mutation rates, and changing that rate is detrimental to virus survival and disease in nature,"Denison said. "Since all coronaviruses have the ExoN protein, this method for attenuation could be broadly applicable in coronaviruses."

"If we can't have a vaccine ready to administer that works for all coronaviruses, then we at least have a strategy for fast production of a functional vaccine for any new epidemic coronavirus that might arise. That's a key take-away point of our paper and what makes it so important in the face of current events," Graham said.

In Saudi Arabia, a new case of coronavirus has been detected. The infected patient was cured after receiving treatment at a Riyadh hospital, Xinhua quoted the official Saudi news agency as saying.
Advertisement
<< Smart Drug Boosts Survival in Leukemia Patients
Children's Day to be 2012's Most Polluted Day >>

Vent Forte (Theophylline) Post-Nasal Drip Sinopril (2mg) (Lacidipine) Color Blindness Calculator Calculate Ideal Weight for Infants Find a Hospital Drug Side Effects Calculator Diaphragmatic Hernia Hearing Loss Calculator The Essence of Yoga
This site uses cookies to deliver our services. By using our site, you acknowledge that you have read and understand our Cookie Policy, Privacy Policy, and our Terms of Use