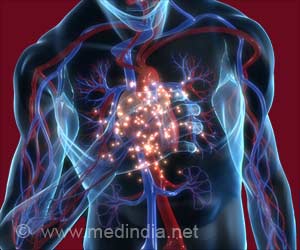 A novel relationship between the gut microbes and atherosclerosis, one of the major causes of heart attack and stroke has been identified by researchers at Western University and Lawson Health Research Institute. This was measured as the burden of plaque in the carotid arteries.

Advertisement
‘Patients with unexplained atherosclerosis were found to have higher blood levels of toxic metabolites that are produced by intestinal bacteria. This establishes the novel link between gut microbes and atherosclerosis, one of the major causes of heart attack and stroke. ’

"What we found was that patients with unexplained atherosclerosis had significantly higher blood levels of these toxic metabolites that are produced by the intestinal bacteria," said Dr. David Spence, professor at Western's Schulich School of Medicine & Dentistry and scientist at Robarts Research Institute. The researchers looked specifically at the metabolites TMAO, p-cresyl sulfate, p-cresyl glucuronide, and phenylacetylglutamine, and measured the build-up of plaque in the arteries using carotid ultrasound.


The study published in the journal Atherosclerosis, noted that these differences could not be explained by diet or kidney function, pointing to a difference in the make-up of their intestinal bacteria.
Advertisement
"There is growing consensus in the microbiome field that function trumps taxonomy. In other words, bacterial communities are not defined so much by who is there, as by what they are doing and what products they are making," said Greg Gloor, PhD, professor at Schulich Medicine & Dentistry, scientist at Lawson and a co-author on the study.

The study indicates that the gut microbiome plays an important role in an individual's risk for atherosclerosis, opening the door for new treatment options for those patients with unexplained plaque build-up in the arteries.

"The finding, and studies we have performed since, present us with an opportunity to use probiotics to counter these compounds in the gut and reduce the risk of cardiovascular disease," said Gregor Reid, PhD, professor at Schulich Medicine & Dentistry, scientist at Lawson, and an expert in probiotics who contributed to the study. Spence adds that repopulation of the intestinal microbiome is another novel approach to treatment of atherosclerosis that arises from this study.

Source: Eurekalert
Advertisement
<< New Way to Kill Only Bad Bacteria in the Gut
Summer Fashion: Top Tips to Look Cool at Your Workplace >>