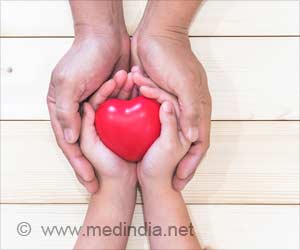 Six-month-old Kenyan baby who was suffering from a rare congenital heart defect gets a new lease of life after Delhi doctors successfully treated him.

Emmanuel Lila Kamank was diagnosed with this heart defect known as Taussig-Bing anomaly just four days after his birth.

Advertisement
‘Emmanuel Lila Kamank, a 6-month-old Kenyan baby who was suffering from Taussig-Bing anomaly, underwent a nine-hour surgery successfully in Delhi hospital and was discharged after a week.’
Read More..

Taussig-Bing anomaly is a malformation of the heart in which there is a transposition of the aorta to the right ventricle, which is a normal case should originate from the left ventricle.


Kamank was admitted at the Indraprastha Apollo Hospital in a cyanotic condition in which the skin develops a bluish discoloration due to lack of oxygen in the blood. He was put on a ventilator as he suffered a sudden respiratory arrest, which caused a cardiac attack.
Advertisement
Kamank's pulmonary artery was also wrongly positioned into the right ventricle. He also had a block in the aorta, as well as a defect caused by an open fetal blood vessel that should get closed soon after birth, Muthu Joshi, Senior Consultant, Paediatric Cardiothoracic surgeon, said in a statement on Thursday.

"It was a high-risk case with limited chances of success even with surgery. We devised a treatment plan for the baby and informed his family about the 50-60 percent surgical risk associated with it. As the family consented, we decided to go ahead with the procedure," Joshi said.

Kamank underwent a nine-hour surgery and was discharged after a week on the ventilator, he said.

The child has returned to Kenya with his family and is doing well, the doctors said.

Multiple Congenital Heart Defects Linked to a Single Gene Mutation
A single mutation in the GATA4 gene has found to lead to two different heart diseases that affect .....