A surgeon from King's College London has developed a short pulse laser technique that can help delay the onset of age-related macular degeneration (AMD) in older adults.

Professor John Marshall, a senior ophthalmologist at King's College London, who had earlier pioneered laser eye surgery to cure short-sightedness, said that the new treatment could delay the effect of ageing without damaging any other cells.


"The treatment is really treating ageing," the Telegraph quoted him as saying.


The novel technique stimulates enzymes to eradicate waste material from a thin membrane behind the retina, called Bruch's membrane.

It was tested in 100 diabetics, and all of them reported improvement in their sights after undergoing the treatment.

In a fresh trial, the researchers will treat patients already suffering from AMD in one eye with the aim of saving the sight in their better eye for as long as possible.

Marshall said that once people have advanced AMD in one eye, the condition usually develops in the second eye in 18 months to three years.

"If you can delay the onset by three, four, six, seven or 10 years, it's proof of the principle," he added.

He said that the aim was to preserve their sight for the rest of their lives.

Marshall hopes that the treatment would be available within two to five years.

Conventional lasers can cause damage to the light sensitive cells in the eye.

Prof Marshall said: "With this laser it's been specifically designed so we don't cause any damage to the light sensitive cells or to any cells." 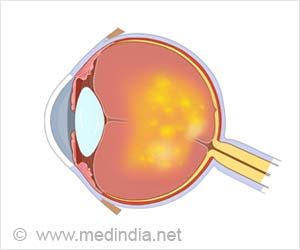