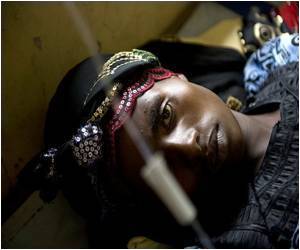 The mechanism that cholera bacterium uses to gain foothold in the gut has been discovered by scientists.

The discovery could help scientists developed new treatments for the globally significant intestinal disease, which kills more than 100,000 people every year.

The disease is caused by the bacterium Vibrio cholerae, which is able to colonise the intestine usually after consumption of contaminated water or food.


Once infection is established, the bacterium secretes a toxin that causes watery diarrhoea and ultimately death if not treated rapidly. Colonisation of the intestine is difficult for incoming bacteria as they have to be highly competitive to gain a foothold among the trillions of other bacteria already in situ.

Cholera cases have soared in the Democratic Republic of Congo in recent weeks, the UN said on Friday, bringing the number of people infected in the year-long outbreak to 22,000 with 584 deaths.
Advertisement
A team of biologists at the University of York, led by Dr Gavin Thomas in the Department of Biology, have investigated one of the important routes that V. cholera uses to gain this foothold.

To be able to grow in the intestine the bacterium harvests and then eats a sugar, called sialic acid, that is present on the surface of our gut cells.

Collaborators of the York group at the University of Delaware, USA, led by Professor Fidelma Boyd, had shown previously that eating sialic acid was important for the survival of V. cholerae in animal models, but the mechanism by which the bacteria recognise and take up the sialic was unknown.

The York research demonstrated that the pathogen uses a particular kind of transporter called a TRAP transporter to recognise sialic acid and take it up into the cell.

The transporter has particular properties that are suited to scavenging the small amount of available sialic acid. The research also provided some important basic information about how TRAP transporters work in general.

"This work continues our discoveries of how bacteria that grow in our body exploit sialic acid for their survival and help us to take forward our efforts to design chemicals to inhibit these processes in different bacterial pathogens," said Dr Thomas.he research has been published in the latest issue of the Journal of Biological Chemistry.