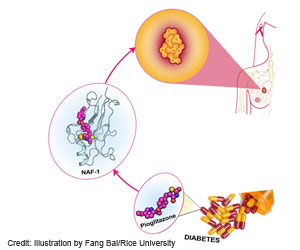 Dialing down the level of the protein NAF-1 and the activity of the iron-sulfur clusters it transports may be key to halting tumor growth, they reported.

In a study this week in the Proceedings of the National Academy of Sciences, the researchers suggest a drug that is typically used to treat type 2 diabetes, pioglitazone, has proven effective at controlling NAF-1 levels.


They also discovered that a single mutation to NAF-1 almost completely blocked the ability of cancer cells to proliferate, a result they said supports the idea that lowering NAF-1 expression can help stop tumors.

Management of breast cancer during pregnancy or pregnancy associated breast cancer requires special consideration to avoid harm to the fetus.
Advertisement
Fine-tuning the drug to specifically address tumors could bring a new weapon to the battle against breast cancer and other cancers, the researchers said. Overexpression of NAF-1 also has been associated with prostate, gastric, cervical, liver and laryngeal cancer, they said.

José Onuchic, Rice's Harry C. and Olga K. Wiess Chair of Physics and professor of physics and astronomy and co-director of the Center for Theoretical Biological Physics (CTBP), worked with Rice research scientist Mingyang Lu, Rice postdoc Fang Bai and scientists from Israel, the University of California, San Diego (UCSD) and the University of North Texas on a multifaceted approach to define the role of NAF-1 in breast cancers.

Understanding the mechanism will help the Rice researchers improve computer simulations to aid in the rapid design and testing of novel drugs, Onuchic said.

NAF-1 is a member of the NEET family of proteins; these proteins transport clusters of iron and sulfur molecules inside cells. The clusters help regulate processes in cells by controlling reduction-oxidation (redox) and metabolic activity. They naturally adhere to the outer surface of the mitochondria, the "power plant" that supplies cells with chemical energy.

Experiments demonstrated that the overexpression of NAF-1 in breast cancer tumors enhanced cancer cells' ability to tolerate oxidative stress. That enhancement allowed the tumors to become much larger and more aggressive, said Ron Mittler, a professor of biological sciences at the University of North Texas.

"Now that we know tumors that overexpress this protein are more sensitive to this type of drug, we can design new drugs in a way that will attack the clusters," Mittler said.

NAF-1 "is kind of like a seesaw," said Patricia Jennings, a CTBP affiliate and a professor of chemistry and biochemistry at UCSD. "It's a sensor that tells your cells when they're getting out of balance and works very hard to bring them back. But once they get a little too far out of balance, the cells can die."

Treating the tumors with pioglitazone stabilized the iron-sulfur clusters in NAF-1, reducing the tumors' tolerance to oxidation. "We now have examples of five or six different types of tumors that need this protein to proliferate," Mittler said. "If they don't have it, they die."

The team also discovered through experiments that expression of an NAF-1 protein that carried a single-point mutation had a similarly toxic effect on cancer cells and prevented tumor proliferation.

Study co-author Rachel Nechushtai, a professor at the Hebrew University of Jerusalem, said tumors depend on the lability, or the transient nature, of the clusters. "The more NAF-1 you make, and the more its clusters can be transferred, the bigger the tumor develops.

"We knew from previous studies that pioglitazone stabilizes the cluster. With the mutant, we hardly got any tumors and didn't see angiogenesis (the process through which new blood vessels form). When we did see tumors, they were white, not red, because they had no blood vessels.

"This is where the initial results from Fang are very nice, because she can show exactly how to modify the drug," said Onuchic, whose lab specializes in predicting protein folding pathways through computer modeling. "That way, one can computationally design the drug before trying to make the real drug. It's a much less expensive way to come up with possibilities."

Bai said, "We can design selective drugs that only bind to NAF-1 and not to other proteins to reduce the side effects based on our new method."