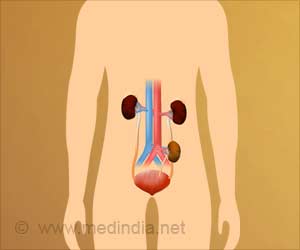 Immunosuppressive belatacept-based regimen can safely and effectively treat kidney transplant patients without exerting long-term side effects caused by various traditional immunosuppressive regimens, according to the preliminary results from a $5.2 million clinical trial led by University of Cincinnati researchers.

The UC-led Belatacept Early Steroid Withdrawal Trial (BEST) represents a significant step forward in the science of how not only to save lives through kidney transplantation, but also how to prolong the lives and improve the quality of life for those patients for decades after surgery.

Since the early times, the novel idea of transplanting tissues and other body parts from one organism to the other has captured the imagination of successive generations.
Advertisement
‘New drug regimen prolongs the life and improves the quality of life among patients who underwent kidney transplantation even for decades after surgery.’
Read More..
Tweet it Now


"In the BEST trial, we tried to achieve something that hadn't been done in transplantation: to eliminate the use of corticosteroids very early after surgery and at the same time avoid the toxicities associated with the cornerstone immunosuppressive medications that had been used for four decades," said principal investigator E. Steve Woodle, MD, William A. Altemeier Professor in Research Surgery at the UC College of Medicine and director of Solid Organ Transplantation for UC Health.


"We wanted to reduce the side effects and toxicities of these medications and make it easier for patients to tolerate their anti-rejection drugs, while achieving rejection rates that are reasonable," Woodle said. "This work solved a vexing 40-year-old problem and represents a major step forward in the field of transplantation."
Advertisement
The study's two-year findings were presented by BEST investigators in several scientific sessions of the annual American Transplant Congress, held June 1-5 in Boston.

Additional findings related to the study were presented by study authors, including Rita Alloway, PharmD, research professor of nephrology at the UC College of Medicine and director of Transplant Clinical Research at UC Health. The two belatacept-based regimens evaluated in the study did not employ long-term use of prednisone (a corticosteroid) or tacrolimus (a calcineurin inhibitor).

"The primary problem that has prevented elimination of corticosteroids and calcineurin inhibitors to date has been excessive rejection rates," Alloway said. "The BEST Trial demonstrates that rejection risk with the new belatacept-based regimens was increased somewhat, and the reduced side effects and long-term cardiovascular risk reduction are major potential advantages of these regimens for the future."

For the 16,000 people who receive a kidney transplant in the U.S. each year, the standard of care involves a post-surgery regimen that includes corticosteroid and calcineurin inhibitor (CNI) immunosuppressants--drugs that for decades have helped organ transplant patients live, but can also come with long-term effects such as kidney toxicity or cardiovascular damage.

In 2011, the U.S. Food and Drug Administration approved the use of belatacept to prevent rejection in kidney transplant patients. Belatacept is a modified version of the drug abatacept, which is used to treat rheumatoid arthritis. The BEST study is the first large, multicenter trial to remove both corticosteroids and CNIs from a patient's drug regimen after kidney transplantation. Both drugs place patients at an increased risk of cardiovascular disease, high blood pressure, high cholesterol and diabetes. CNIs have also shown toxicity to transplanted kidneys.

UC Medical Center was the coordinating center for the trial, and many of the patients were treated there.

After two years, the data shows that patients in the belatacept-based groups showed slightly higher rates of rejection, but lower rates of GI toxicity, neurotoxicity, electrolyte imbalance and other adverse effects associated with steroid-based regimens.

"This CNI- and steroid-free [immunosuppressive] protocol is a promising step forward in minimizing toxicities and improving renal allograft function," the study authors wrote. "Longer-term observations will need to be continued."

One unique feature of the BEST Trial was the involvement of patient-reported outcomes collected via patient surveys--uncommon in a clinical trial but critical to the success of the study, Alloway said. Those findings were shared for the first time at the American Transplant Congress meeting.

"The patients tell you how much better they feel and function with this new drug combination than they do with the standard combination," Alloway said. "And so we're able to show what specific side effects are reported in less than 5%, less than 10%, less than 15% of patients--and how that's different than what you see in the standard of care."

Paired donor exchange kidney transplantation is a process in which unrelated kidney donors are matched to ...