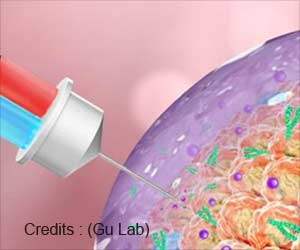 New system to prioritise and rank 600 drug targets that show potential treatment options for cancer, was discovered by the research team from the Wellcome Sanger Institute and Open Targets, with the help of CRISPR technology which interrupted every gene in 300 cancer models of 30 cancer types and identified thousands of vital genes essential for cancer's survival.

Proton therapy is a form of radiotherapy for cancer treatment which uses a proton beam that is targeted precisely on the tumor cells, destroying them with minimal damage to surrounding healthy tissue. Proton therapy can treat various types of cancer.
Advertisement
‘Cancer patients could benefit from new targeted therapies that selectively kill cancer cells, leaving healthy tissue unharmed unlike the standard chemotherapy, radiotherapy and surgery.’
Read More..
Tweet it Now


Every two minutes someone in the UK is diagnosed with cancer, and one in two people will develop cancer at some point in their lives. Surgery, chemotherapy and radiotherapy are commonly used to treat cancer, however while they can be effective at killing the cancer cells, some patients don't respond to treatment and healthy tissue can be damaged, leading to unwanted toxic side effects for patients.


Scientists and pharmaceutical companies are exploring new targeted therapies that selectively kill cancer cells, leaving healthy tissue unharmed. Currently, producing new effective treatments is very difficult; it costs approximately $1-2 billion to develop a single drug, but around 90 per cent of drugs fail during development. Therefore, selecting a good drug target at the beginning of the process can be seen as the most important part of drug discovery.
Advertisement
Researchers at the Wellcome Sanger Institute, GSK, EMBL-EBI, Open Targets and their collaborators have conducted one of the largest CRISPR screens of cancer genes to date, disrupting nearly 20,000 genes in over 300 cancer models from 30 cancer types to uncover which genes are critical for cancer survival. The team focused on common cancers, such as lung, colon and breast, and cancers of particular unmet clinical need, such as lung, ovarian and pancreatic, where new treatments are urgently needed.

Scientists identified several thousand key cancer genes and developed a prioritisation system to narrow down the list to approximately 600 genes that showed the most promise for drug development.

A top-scoring target present in multiple different cancer types was Werner syndrome RecQ helicase (WRN). The team found that cancer cells with a faulty DNA repair pathway, known as microsatellite unstable cancers, require WRN for survival. Microsatellite instability occurs in many different cancer types, including 15% of colon and 28% of stomach cancers*. The new identification of WRN as a promising drug target offers an exciting opportunity to develop the first cancer treatments to target WRN.

Dr Kosuke Yusa, co-lead author previously from the Wellcome Sanger Institute and Open Targets, now based at the Institute of Frontier Life and Medical Sciences, Kyoto University, said: "CRISPR is an incredibly powerful tool that enables us to do science at a scale and with a precision that we couldn't do five years ago. With CRISPR we have discovered a very exciting opportunity to develop new drugs targeting cancers."

Dr Francesco Iorio, co-first author from the Wellcome Sanger Institute and Open Targets, said: "To give a new drug the best chance of succeeding in the very final phases of clinical trials, it is crucial to select the best and most promising drug target at the beginning of the drug development process. For the first time, in a data-driven way, we provide guidance at a genome-scale on which new therapeutic targets should be put forward for the development of new anti-cancer drugs."

The collaboration between researchers at Sanger, EMBL-EBI and GSK, the Open Targets partners, bolster the translation of these research results into new treatments.

The datasets produced in this new study lay the foundations for producing the Cancer Dependency Map***, a detailed rulebook for the precision treatment of cancer.

Dr Mathew Garnett, co-lead author from the Wellcome Sanger Institute and Open Targets, said: "The Cancer Dependency Map is a huge effort to identify all the weaknesses that exist in different cancers so we can use this information to empower the next generation of precision cancer treatments. Ultimately we hope this impacts on the way we treat patients, so many more patients get effective therapies. In the meantime, this tool will be freely available for scientists across the world to understand what makes a cancer a cancer, and how we might target different types of cancers much more effectively than we do today."

Dr Fiona Behan, co-first author from the Wellcome Sanger Institute and Open Targets, said: "With the Cancer Dependency Map, I really hope to revolutionise treatment for patients. I didn't get in this game to generate long lists of priority targets, I want to make a difference in a patient's life. Even a handful of new, more effective anti-cancer drugs in the clinic or an improvement in the drug development process as a result of this research would benefit an enormous number of patients."

Professor Karen Vousden, Cancer Research UK's chief scientist, said: "What makes this research so powerful, is the scale. CRISPR provides a unique tool to accelerate discovery of oncology drug targets, and this study is a salient leap in a positive direction.

"But we should remember that studying cells in the lab doesn't always reflect the complexities of cancer in the human body and so will not necessarily reflect how someone will respond to a drug. This work provides some excellent starting points and the next steps will be a thorough analysis of the genes that have been identified as weaknesses in this study, to determine if they will one day lead to the development of new treatments for patients."

Tumor lysis syndrome is a collection of metabolic abnormalities due to the tumor cell lysis in patients with ...
This site uses cookies to deliver our services.By using our site, you acknowledge that you have read and understand our Cookie Policy, Privacy Policy, and our Terms of Use  Ok, Got it. Close
×