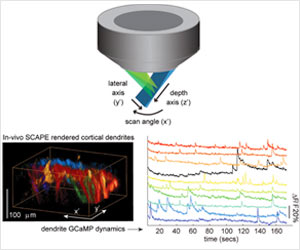 Opening new doors for biomedical and neuroscience research, Elizabeth Hillman, associate professor of biomedical engineering at Columbia Engineering and of radiology at Columbia University Medical Center (CUMC), has developed a new microscope that can image living things in 3D at very high speeds.

In doing so, she has overcome some of the major hurdles faced by existing technologies, delivering 10 to 100 times faster 3D imaging speeds than laser scanning confocal, two-photon, and light-sheet microscopy. Hillman's new approach uses a simple, single-objective imaging geometry that requires no sample mounting or translation, making it possible to image freely moving living samples.

She calls the technique SCAPE, for swept confocally aligned planar excitation microscopy. Her study is published in the Advance Online Publication (AOP) on Nature Photonics's website on January 19, 2015.


"The ability to perform real-time 3D imaging at cellular resolution in behaving organisms is a new frontier for biomedical and neuroscience research," says Hillman, who is also a member of Columbia's Mortimer B. Zuckerman Mind Brain Behavior Institute. "With SCAPE, we can now image complex, living things, such as neurons firing in the rodent brain, crawling fruit fly larvae, and single cells in the zebrafish heart while the heart is actually beating spontaneouslythis has not been possible until now."
Advertisement
Highly aligned with the goals of President Obama's BRAIN Initiative, SCAPE is a variation on light-sheet imaging, but, "It breaks all the rules," says Hillman. While conventional light-sheet microscopes use two awkwardly positioned objective lenses, Hillman realized that she could use a single-objective lens, and then that she could sweep the light sheet to generate 3D images without moving the objective or the sample.

"This combination makes SCAPE both fast and very simple to use, as well as surprisingly inexpensive," she explains. "We think it will be transformative in bringing the ability to capture high-speed 3D cellular activity to a wide range of living samples."

SCAPE is an urgently needed breakthrough. The emergence of fluorescent proteins and transgenic techniques over the past 20 years has transformed biomedical research, even delivering neurons that flash as they fire in the living brain. Yet imaging techniques that can capture these dizzying dynamic processes have lagged behind. Although confocal and two-photon microscopy can image a single plane within a living sample, acquiring enough of these layers to form a 3D image at fast enough rates to capture events like neurons actually firing has become a frustrating road-block.

While SCAPE cannot yet compete with the penetration depth of conventional two-photon microscopy, Hillman and her collaborators have already used the system to observe firing in 3D neuronal dendritic trees in superficial layers of the mouse brain. In small organisms, including zebrafish larvae, SCAPE can see through the entire organism.

By tracking these tiny, unrestrained creatures in 3D at high speeds, SCAPE can capture both cellular structure and function and behavior. SCAPE can also be combined with optogenetics and other tissue manipulations during imaging because, unlike other systems, it does not require any movement of the imaging objective lens or the sample to create a 3D image.

Hillman and her students built their first SCAPE system using inexpensive off-the-shelf components. Her "aha" moment came when, looking at an old polygonal mirror in the lab, she realized how it could be used to generate SCAPE's unusual scanning geometry.

After several years of trial and error, Hillman and graduate student Matthew Bouchard came up with a configuration that worked, and beautiful images started to flow out. "It wasn't until we built it that we realized it was a light-sheet microscope!" says Hillman. "It took us a while to realize how versatile the imaging geometry was, how simple and inexpensive the layout wasand just how many problems we had overcome."

Beyond neuroscience, Hillman sees many future applications of SCAPE including imaging cellular replication, function, and motion in intact tissues, 3D cell cultures, and engineered tissue constructs, as well as imaging 3D dynamics in microfluidics, and flow-cell cytometry systemsall applications where molecular biology is delivering tools and techniques, but imaging methods have struggled to keep up.

Hillman also plans to explore clinical applications of SCAPE such as video-rate 3D microendoscopy and intrasurgical imaging. Next-generation versions of SCAPE are in development that will deliver even better speed, resolution, sensitivity, and penetration depth.

"Deciphering the functions of brain and mind demands improved methods for visualizing, monitoring, and manipulating the activity of neural circuits in natural settings," says Thomas M. Jessell, co-director of the Zuckerman Institute and Claire Tow Professor of Motor Neuron Disorders, the Department of Neuroscience and the Department of Biochemistry and Molecular Biophysics at Columbia. "Hillman's sophistication in optical physics has led her to develop a new imaging technique that permits large-scale detection of neuronal firing in three-dimensional brain tissues. This methodological advance offers the potential to unlock the secrets of brain activity in ways barely imaginable a few years ago."

Hillman's technology is available for licensing from Columbia Technology Ventures and has already attracted interest from multiple companies.

A patent related to this technique issued on December 31st 2013 (inventors Hillman and Bouchard). The authors are currently in licensing discussions.

Source: Medindia
Advertisement
<< It's Time to Bring Down the Prevalence of Non-communicable D...
Drug for Treatment of AIDS Awaits FDA Approval >>

Japan Researchers Create Custom-Made Body Parts With 3D Printer
Skin, bone and joints could now be created using a a next-generation bio 3D printer, which can ......

Breast Cancer Detection Rate Improves With 3D Mammography
The breast cancer detection rate can be significantly increased with the help of digital breast ......