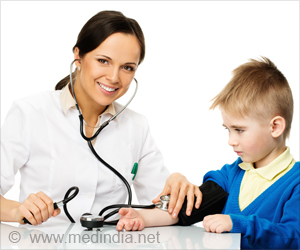 More U.S. children were found to have high blood pressure levels with the change in guidelines from the American Academy of Pediatrics, reveals a new study.

The 2017 blood pressure guidelines made two important changes compared to the 2004 fourth report from the National Heart, Lung, and Blood Institute (NHLBI).

The first was the exclusion of children who are overweight or obese from the charts used to define normal blood pressures because they tend to have higher blood pressures and worse cardiovascular outcomes later in life.

About 15,647 generally healthy, low-risk children (ages 5 to 18) from the National Health and Nutrition Examination Surveys (NHANES from 1999 to 2014) were used to assess the consequences of the new guidelines classifying blood pressure.
Advertisement
Blood pressure classification based on either the new 2017 American Academy of Pediatrics guidelines or the 2004 NHLBI report.

This was an observational study. Researchers were not intervening for purposes of the study and cannot control for all other factors that could explain the study findings.

The authors of this study were Celia J. Rodd, M.D., M.Sc., F.R.C.P.C., of the University of Manitoba, Canada, and coauthors.

Insufficient number of children to assess differences by race, sex and age; a lack of information on medical history, family history and co-existing medical problems; and no long-term follow-up.