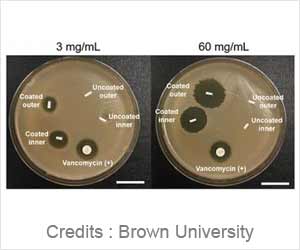 New antibacterial coating for intravascular catheters may prevent catheter-related bloodstream infections, reports a new study. The findings of the study are published in the Frontiers in Cellular and Infection Microbiology journal.

Brown University researchers have developed a new antibacterial coating for intravascular catheters that could one day help to prevent catheter-related bloodstream infections, the most common type of hospital-acquired infection.


"These kinds of infections are a major burden for hospitals, health care providers and most of all for patients," said Anita Shukla, an assistant professor of engineering at Brown and corresponding author of a new paper describing the work. "We wanted to develop a coating that could both kill planktonic [free-floating] bacteria and prevent colonization of bacteria on surfaces. The initial data that we gathered for this paper shows that we have something really promising."


In the paper, the researchers show that a polyurethane coating that can be readily applied to various medically relevant surfaces and gradually releases a drug called auranofin can kill methicillin-resistant Staphylococcus aureus (MRSA) bacteria for nearly a month in lab tests. The tests also showed that the coating could prevent the formation of MRSA biofilms, which, once established, are especially resilient to antimicrobial treatment.

The research is a collaboration between Shukla's lab in Brown's School of Engineering and the labs of Eleftherios Mylonakis and Beth Fuchs in the Division of Infectious Diseases in Brown's Warren Alpert Medical School.

"It's a perfect collaboration between medicine and engineering," Shukla said of the partnership. "They [Mylonakis and Fuchs] come to us with the types of problems that they commonly see in the clinic. As an engineering lab focused on developing new biomaterials for drug delivery, we can then work on engineering solutions to the problems they bring us."

The problem, in this case, is a prominent one. More than 150 million intravascular catheters are implanted each year in the United States alone, and infections stemming from implants develop in 250,000 patients a year. Those infections are fatal in up to 25 percent of cases, and even when successfully treated can add up to millions of dollars in extended hospital stays.

Previous approaches to the problem have met with limited success, the researchers say. Other antibacterial coatings tend to lose their effectiveness after two weeks at most, often because they release their drug payload too quickly. Other coatings also tend to use traditional antibiotics, raising concerns about antibiotic resistance over long term use.

For their new coating, Shukla and colleagues utilized auranofin. This drug was originally developed and approved by the U.S. Food and Drug Administration to treat arthritis, but studies by Mylonakis, Fuchs, and others have shown that the drug is also highly effective in killing MRSA and other dangerous microbes. In addition, it works in ways that make it hard for bacteria to evolve a natural resistance. Auranofin had never previously been incorporated into a coating technology.

To make the coating, the researchers dissolved polyurethane and concentrations of auranofin in a solution, which was then deposited onto a catheter. The solvent is then evaporated away, leaving a stretchable yet durable polymer coating. Mechanical testing showed that the coating can stretch up to 500 percent without breaking.

To test the coating's effectiveness, the researchers placed coated catheters in MRSA both in solution and on agar plates where MRSA bacteria thrive. The experiments showed that the coatings were able to inhibit MRSA growth for up to 26 days, depending on the initial concentration of auranofin used in the coating. The researchers also used bioluminescence imaging to look for signs of biofilm formation. Those experiments showed that the coatings prevent any trace of biofilm. For comparison, the researchers also tested a catheter loaded with a more traditional antibiotic, highly effective against free-floating MRSA, which proved unable to prevent biofilm formation.

"The antibiofilm finding is very critical," Shukla said. "Biofilms have really effective ways of evading antibiotics, which makes them thousands of times more difficult to treat in terms of the concentration of drug needed compared to planktonic bacteria. The fact that these coatings are able to prevent biofilms from forming in the first place is really important."

Preliminary tests for toxicity in the lab showed that the coatings had no adverse effects on human blood or liver cells, but more testing is required before the coating is ready to be used on patients, Shukla says. The fact that both of the coating's components have been approved by the FDA for other uses should speed the approval process for in vivo testing.

"We're hopeful that the initial results we show here will soon translate to the clinic," Shukla said. 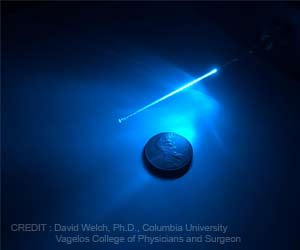 Far-UVC Light May Prevent Infections in Catheters, Cardiac Drivelines
Infections from skin-penetrating medical devices such as catheters are are a significant threat and may lead to various complications. Far-UVC light, delivered by optical fibers can prevent catheter-based and cardiac driveline infections.
READ MORE

Antimicrobial Catheter Which can Remain Infection-free Developed
A novel antimicrobial catheter that remains infection-free for up to twelve weeks could dramatically improve the lives of long-term catheter users.
READ MORE

Anti-bacterial Coating Technology to Prevent Infection
A new coating technology to help prevent biofilms from forming on the surfaces of implanted devices has been developed.
READ MORE