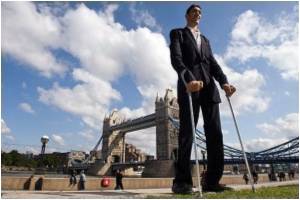 Hundreds of genes that influence human height have been discovered by an international team of researchers, including a number from the University of North Carolina at Chapel Hill schools of medicine and public health.

Their findings confirm that the combination of a large number of genes in any given individual, rather than a simple "tall" gene or "short" gene, helps to determine a person's stature. It also points the way to future studies exploring how these genes combine into biological pathways to impact human growth.

Are you worried that your child will be short - follow our five simple tips to ensure that your child's full height potential is realized.
Advertisement

"While we haven't explained all of the heritability of height with this study, we have confidence that these genes play a role in height and now can begin to learn about the pathways in which these genes play a role," said study coauthor Karen L. Mohlke, PhD, associate professor of genetics in the UNC School of Medicine.


The study, which appears online Sept. 29, 2010, in the journal Nature, is the result of the largest consortium of researchers to ever study the trait. The consortium, aptly named GIANT for Genetic Investigation of ANthropometric Traits.

Yoga is one very effective exercise - to add a few inches to your height -- when done correctly and diligently. With yoga a person can cleanse oneself physically as well as improve their mental faculties.
Advertisement
Traits, brought together hundreds of investigators from dozens of countries, to identify which genes affect height in almost two hundred thousand different individuals.

"These investigators had once been competing with each other to find height genes, but then realized that the next step was to combine their samples and see what else could be found," said Mohlke. "The competitors became collaborators to achieve a common scientific goal."

That pooling of resources was necessary because the scientists knew that height was a complex genetic trait, with possibly a number of genes of small effect each adding up to influence whether a person would be taller or shorter. In this large study, forty-six smaller genome-wide association studies of height were combined and then analyzed statistically, yielding 180 different regions or genetic loci that influence the trait. "These common gene variants could explain as much as sixteen percent of the variation in height," said study co-author Kari North, PhD, associate professor of epidemiology in the UNC Gillings School of Global Public Health.

The researchers looked to see whether the 180 regions contained more genes that underlie skeletal growth defects than would be expected if those regions were just chosen randomly across the genome. They found that the genes were not random and could in fact point to functional pathways important in influencing height.

Members of the consortium are working to uncover the "missing heritability" - the proportion of inherited variation in height that is still unexplained. Because this study looked for common genetic variants, the researchers are now going after rare genetic variants that may also play a role.

"This work is giving the field important insights into skeletal growth, height and growth defects," said Mohlke. "And it is also showing us how similar approaches can be taken to look for genes underlying other common traits and diseases relevant to body size, like type 2 diabetes."