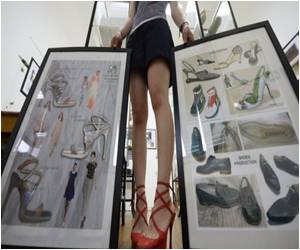 A new shoe line has been introduced by designer Jimmy Choo using materials native to the disaster-hit Fukushima area, as an attempt to boost the morale of the artisans there.

Choo was inspired to come up with the creations after visiting workshops in the area, which is struggling to overcome the tsunami-sparked nuclear catastrophe that hit in 2011.

There he found traditional materials that have been made in the area for hundreds of years, such as Aizu cotton, super-fine Kawamata silk and the Aizu lacquerware, which he thought could perfectly complement six pairs of high heels.


"When I looked at the fabric, I felt it was very, very unusual, especially when I saw the workshop, the tradition 250 years old," the London-based designer told AFP.
Advertisement
"They use their own material to create this beautiful fabric. These people... they know how to weave the fabric (but) they don't know how important (it is) to let the whole world enjoy the craftsmanship, enjoy beautiful fabric."

The Penang, Malaysia-born Choo, whose haute couture shoes are worn by everyone from British royals to Madonna and US First Lady Michelle Obama, said a pair of shoes is more than just something to wear on your feet.

"You know the shoe is a shoe, but a shoe to me is an art piece... Some people can buy them and not necessarily wear them."

Choo said he believed the kind of true craftsmanship he had seen in Fukushima had the power to help turn around the fortunes of a place where tens of thousands of people remain displaced because of radiation released from the crippled nuclear plant.

The six pairs of shoes he made will be donated to local organisations in the area after they have been exhibited, and Choo says he hopes they will help to bolster the profile of talented craftsmen nearby, so that they have something to build on for the future.

"If you give money to them, money (will run out), but passing on the skill, the skill will remain. They can start their own businesses, they can acquire people, they can start a factory, bringing the economy back to the city."

Choo has focused on a couture line catering to deep-pocketed clients after selling his share of an eponymous ready-to-wear brand in 2001.

He opened up his own London workshop in the late 1980s, gaining recognition and international exposure after being featured in Vogue Magazine, but his star power soared to new heights after Princess Diana was photographed wearing his creations.

More News on:
Walking for Fitness and Weight Loss How to Choose the Right Shoes for Your Baby

Smart Running Shoes to Hit the Market in Near Future
Researchers have developed 'smart' running shoes, which can tell their wearers how to improve their ...

Shoeshining Proves to be the Way Out for Jobless Orlando
62-year-old Orlando Sousa is training for a new career as a shoeshiner in the Portuguese capital ......

US Students Develop Shoes That Generates Electricity
US media reported that four US students have developed shoes that extract energy with every step to ...

How to Choose the Right Shoes for Your Baby
Read on for some tips on shoe essentials for your babys feet....