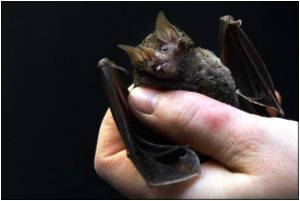 A new strain of influenza A virus has been discovered in fruit bats.

"This is the first time an influenza virus has been identified in bats, but in its current form the virus is not a human health issue," said Suxiang Tong, head of the Centers for Disease Control and Prevention's pathogen discovery program.

Influenza (or rather, the flu) is a cold weather infectious condition that affects the young and old alike. Though most reported cases are mild, the flu can sometimes cause severe and life-threatening complications in both children and adults, thanks to wrong medications and improper vaccinations. Learn more about the disease from our Flu Quiz and guard yourself and your family from a poss
Advertisement

"The study is important because the research has identified a new animal species that may act as a source of flu viruses."


The influenza A virus was detected in a sample of three of 316 live little yellow-shouldered bats captured at two different sites in Guatemala.

That type of bat is not known to bite humans but feeds on fruit, and is native to Central and South America.

Higher Risk of Exposure to the Influenza A (H1N1) Virus Among Hispanics in the U.S

Higher risk of exposure to the influenza A (H1N1) virus among Hispanics in the U.S during the 2009 H1N1 pandemic.
Advertisement
Previous flu pandemics, such as the 2009 H1N1 pandemic, which came to the public's attention as "swine flu," have been known to originate in animals and eventually transform so that they gain the ability to infect people.

"A different animal -- such as a pig, horse or dog -- would need to be capable of being infected with both this new bat influenza virus and human influenza viruses for reassortment to occur."

More details about the findings are published in the US journal the Proceedings of the National Academy of Sciences.

Fruitarian diet is composed of more than 50 percent of fruits. A variety of fruits can be included in your ...

Top reasons why you should eat fruits to lower blood pressure and reduce the risk of heart disease. ...

Nail changes could indicate a health problem or a disease condition. Read more to know about what your nails ...