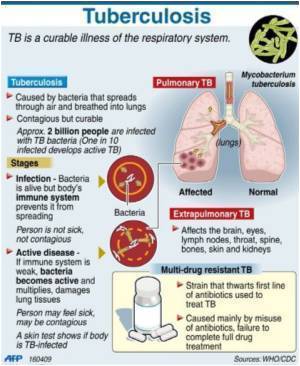 Scientists have isolated an enzyme called MMP-1, that aids in the destruction of the lung tissue. This discovery could pave way for better treatment of tuberculosis, says US-British study.

Tuberculosis is a highly contagious and often fatal disease that kills two million people worldwide each year. Even though the disease has been around for thousands of years, scientists are only now learning how it works.

The enzyme that drives the destruction of lung tissue is called MMP-1, and enzyme-inhibitors are already available which could be used to treat it, said the study in the Journal of Clinical Investigation.

Respiratory diseases affect any part of the respiratory system. Some of the lung diseases like chronic obstructive pulmonary disease can lead to respiratory failure.
Advertisement
"These findings suggest that drugs available now might be able to reduce deaths from TB."

Tuberculosis is caused by a bacterium, Mycobacterium tuberculosis, which gets into the lungs and causes coughing. That spreads the bacteria in the air where it can infiltrate other people's lungs.

The only treatments available are lengthy antibiotic regimens, which may not work against drug-resistant strains.

But another avenue has shown promise, according to the study.

Researchers treated human cells infected with TB -- which were associated with a boost in the enzyme MMP-1 in the lungs -- in the lab with an MMP inhibitor that has been proven safe for humans in clinical trials to treat arthritis.

"We demonstrate that Ro32-3555, a compound that has been used in phase III clinical trials for arthritis, can suppress M. tuberculosis-driven MMP-1 activity," said the study.

"Therefore we believe it represents a novel therapeutic target to limit immunopathology."

Drugs that act by inhibiting MMP enzymes were widely developed in the 1990s as some showed early promise against cancer.

The researchers said more studies are needed to demonstrate whether MMP inhibitors can prevent lung damage from TB on a larger scale.

A group of scientists have developed a potential new experimental diagnostic test that is able to quickly distinguish individuals with active tuberculosis (TB) from those with latent TB infection.
Advertisement
<< Children Carrying Gizmos To Class, and Not the Traditional ...
Malaysian State Clerics Approve 'Christian' Line Dance >>