New Exhibition Rakes Up the Past Acts of Nikita Khrushchev 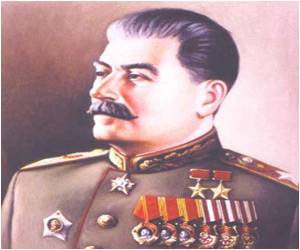 In 1954, why did Moscow handover Crimea to Soviet Ukraine? Was the "red phone" hotline linking the Kremlin and Washington after the Cuban missile crisis an actual telephone?

A new exhibition hopes to answer both questions, and more, by probing the past of Nikita Khrushchev, the Soviet leader who notoriously brandished a shoe at the United Nations - and sowed the seeds of todayï¿½s standoff with the West over Ukraine.

The World Population Day is observed by the United Nations Population Fund on July 11 every year.
Advertisement

Over 700 documents and objects are on display - some for the first time - in the Moscow show on the controversial legacy of Khrushchev, who led a de-Stalinisation campaign and eased the repression and censorship of the Communist regime.


Khrushchev, leader from 1953 to 1964, is best known for denouncing Stalinï¿½s cult of personality in a speech to the Communist Partyï¿½s 20th Congress - whose draft is on display for the first time.

Eating 5 servings of fruits and vegetables a day takes care of the fiber your system needs to a large extent.
Advertisement
But other documents in the exhibition at the Federal Archives reveal that he ordered executions during the Stalin purges of the 1930s.

There is also the original decree that Khrushchev - himself a native of eastern Ukraine - signed on January 25, 1954 to endorse the "handover of the Crimean region" to the Soviet republic of Ukraine.

In another document, a senior Soviet official, Mikhail Tarasov, justifies the peninsulaï¿½s handover due to the "unity of the economy, geographical proximity and close economic and cultural ties" between Crimea and Ukraine.

Sixty years later, that argument was turned on its head to justify the regionï¿½s return to the Russian fold due to the populationï¿½s ties with Moscow.

Curator Andrei Sorokin, said his goal was to shatter "myths".

The real facts behind one of the most quoted episodes in Khrushchevï¿½s career -- when he allegedly banged his shoe on his desk at the plenary meeting of the United Nations General Assembly in 1960 -- are still being debated, Sorokin said.

"There is no evidence" that Khrushchev pounded his shoe on his desk, angered by the head of the Filipino delegationï¿½s criticism of the Soviet Unionï¿½s imperialism in Eastern Europe, Sorokin said.

"The pictures of Khrushchev with a shoe in his hand are fake," Sorokin said, arguing that he "took his shoe off and held it up in disapproval," but did not use it to pound on the desk.

Even if no picture of Khrushchev banging his shoe exists, photographs, including by AFP, clearly show the Soviet leaderï¿½s shoe on his desk as he attended the plenary meeting.

"He took off his right shoe, a well-waxed yellow shoe, and waved it in the air above his head, banging it down on the desk with all his might," AFP reported at the time.

The exhibition revisits the Cuban missile crisis: when the deployment of Soviet nuclear missiles to Cuba in 1962 brought superpowers Washington and Moscow to the brink of nuclear war.

A Washington-based secret agentï¿½s encrypted message to Khrushchev describes a "military hysteria" that gripped the United States at the height of the crisis.

According to the message, dated October 27: "The White House, the Pentagon, the State Department and the CIA are working day and night" to "develop emergency evacuation plans for the President (John Kennedy), the government and key ministries to secret locations 300 miles from Washington in case the war is triggered."

The crisis, which ultimately ended in the withdrawal of Soviet missiles from Cuba, led to the easing of strained US-Soviet relations.

One exhibit symbolizes the improvement: a Washington-Moscow hotline - known as the "red telephone" - installed in 1963 to allow direct communications between the US and Soviet leaders.

The device was not actually a telephone or even red. The first was a brown teletype machine that allowed Kennedy and Khrushchev to communicate through encoded written messages.

Khrushchev was a reformer who presided over a period of relative liberalisation in daily life and culture dubbed the Khrushchev Thaw and freed millions of political prisoners from Stalinï¿½s GULAG labour camps.

But the exhibition also shows orders signed by Khrushchev to execute "enemies of the people" in the Moscow region in the late 1930s.

Khrushchev himself disliked the term Thaw to refer his time in power.

"The Thaw is not our term, as weeds grow during a thaw and weeds must be uprooted," he is quoted as saying.