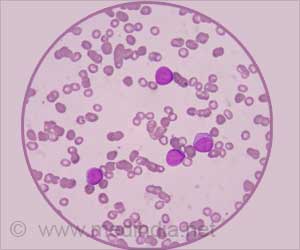 New inhibitor drug named gilteritinib targets mutation in the Fms-like tyrosine kinase 3 (FLT3) gene - in relapsed or refractory acute myeloid leukemia (AML) making patients live twice as long as those who receive chemotherapy, according to the team of researchers at the Abramson Cancer Center of the University of Pennsylvania who will present the findings of ADMIRAL-a randomized clinical trial at the 2019 American Association for Cancer Research Annual Meeting in Atlanta.

Alexander Perl, MD, MS, an associate professor of Hematology-Oncology in the Perelman School of Medicine at the University of Pennsylvania, led the trial and will present the results both at press briefing today as well as during a Tuesday plenary session. The drug, which is manufactured by Astellas Pharma, Inc., was recently approved by the U.S. Food and Drug Administration under the name XOSPATA® based on an interim analysis of this trial's data.

Acute myeloid Leukemia, more popularly known by its abbreviated form AML, is a fast- evolving leukemia that affects both children and adults alike
Advertisement
‘Patients with FLT3 mutations in relapsed or refractory AML have low response rate to chemotherapy along with poor survival. Gilteritinib pill could address this issue.’
Read More..
Tweet it Now


"Patients with FLT3 mutations who have relapsed or refractory AML have very low response rates to chemotherapy at the time of relapse, and their survival is poor as a result," Perl said. "This drug is specifically designed to help this group of patients, and now we've shown it can make a huge difference for those who, until recently, had no specific therapies available beyond chemotherapy."


An estimated 19,000 patients will be diagnosed with AML in the United States this year. FLT3 is the most commonly mutated gene in AML and is found in about 30 percent of patients' leukemia cells. The FLT3 gene is expressed in normal bone marrow cells and regulates the orderly growth of blood cells in response to daily demands. When the gene is mutated in a leukemia cell, however, the cancer cells grow in an uncontrolled manner unless the function of FLT3 is turned off by drugs like gilteritinib.
Advertisement
Gilteritinib is a pill patients take once a day, and previous studies have shown it can inhibit activity in AML patients with the two most common types of FLT3 mutations. The first is called FLT3 internal tandem duplication (FLT3-ITD) and is associated with aggressive disease behavior, frequent relapse, and short remission duration. The overall survival for patients with relapsed or refractory FLT3-ITD mutated AML historically has been an average of about four months with current therapies. To lower relapse risk, oncologists often recommend the most aggressive chemotherapy approaches for AML patients with FLT3-ITD, including marrow transplantation. The second FLT3 mutation gilteritinib targets occurs in the gene's tyrosine kinase domain (TKD) and is associated with resistance to a number of previously developed FLT3 inhibitors.

"Across the board, this trial shows gilteritinib carries a clear survival benefit, meaning we now have a targeted, highly-effective, and well-tolerated treatment option for a group of truly high-risk patients," Perl said.

"Although the incidence of various side effects was similar across the study arms, patients took gilteritinib for considerably longer than they underwent chemotherapy," Perl said. "This actually means the likelihood of side effects on a daily basis is lower on this drug, and this favorable side effect profile allowed us to give gilteritinib as an outpatient treatment, a huge shift for these patients."

Perl noted that the safety profile of the drug also means gilteritinib can be used not only to stabilize patients for a potentially curative bone marrow transplant, but also as an ongoing therapy following transplant in hopes of reducing the chance for relapse. Multicenter clinical trials of gilteritinib as part of frontline chemotherapy for newly diagnosed patients with AML and FLT3 mutations as well as maintenance therapy following bone marrow transplant have also begun.

Perl is leading these trials at Penn and says focusing on preventing, rather than treating relapse by using active and well tolerated new agents early in disease course could substantially increase cure rates for this high-risk leukemia population.