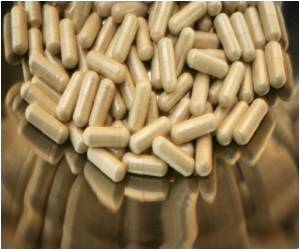 Will it not be great if you could just pop a pill to shed those extra pounds without going through any harmful side effects? Well, it may be possible now.

Zafgen, a start-up drug company in Cambridge, has announced that its first human test of a drug named ZGN-433 caused 24 obese women to lose, on average, a kilogram a week for a month, reports New Scientist.

What's more, the drug has no harmful side effects.


This is a very good rate of weight loss, especially as the women ate normally and were not given exercise advice. It is almost the maximum rate considered safe, and nearly as effective as surgery to reduce stomach size.

"We are indeed much more than what we eat, but what we eat can nevertheless help us to be much more than what we are". - Adelle Davis There are thousands out there battling 'the bulge'. With childhood obesity on the rise even children are not spared. If your weight issues are threatening to weigh you down learn more about obesity by taking part in this quiz.
Advertisement
In particular, fat makes you lose sensitivity to the hormone insulin, which normally promotes the burning of fat and opposes its synthesis.

Tom Hughes of Zafgen said that the experiments in animals show that this blocking causes the inhibition of several key genes which would otherwise activate other genes that boost insulin resistance, the overproduction of fat and the inflammation that accompanies obesity and may cause its unhealthy effects.

"We definitely see our treatment being used with diet and exercise," said Hughes.

Alan Cherrington of Vanderbilt University in Nashville, who has worked on a related drug, fumagillin, said, "Indeed, it would appear that the drug increases the breakdown of fat," though the complete mechanism is not yet known.

"These are early days in the life of this molecule, but certainly the results to date are extremely encouraging," he said.

The detailed results of the pill will be reported next week at a conference on obesity in Keystone, Colorado.

Sinopril (2mg) (Lacidipine) Find a Doctor The Essence of Yoga Accident and Trauma Care Color Blindness Calculator Vent Forte (Theophylline) Indian Medical Journals Post-Nasal Drip Selfie Addiction Calculator Drug Interaction Checker
This site uses cookies to deliver our services.By using our site, you acknowledge that you have read and understand our Cookie Policy, Privacy Policy, and our Terms of Use  Ok, Got it. Close
×