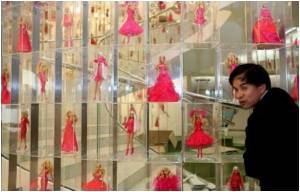 New dolls from the makers of Barbie have created anger among people after describing one doll as needing to "pluck, shave and wax".

Parenting experts and psychologists have slammed Mattel's Monster High range, which boasts a character that must spend a large amount of time removing her excess hair to remain "scarily fabulous".

Barbie doll maker Mattel has been branded irresponsible after the recruitment drive for glamor models as young as 12.
Advertisement

"My hair is worthy of a shampoo commercial, and that's just what grows on my legs," the Daily Mail quoted an online profile for the Clawdeen Wolf character, who is the daughter of a werewolf, as reading.


"Plucking and shaving is definitely a full-time job but that's a small price to pay for being scarily fabulous," it stated.

The doll, which is aimed at girls between the ages of ten and 12, wears thigh-skimming skirts, heavy make-up and platform shoes, and describes her favourite activity as "flirting with boys".

New Barbie With Hidden Camera Could be Misused by Pedophiles: Experts

"When we have these ridiculous models - sexualised children, and horses with long eyelashes that are flirtatious and all of that - it sets up this ideal of beauty and body image that kids have to pay attention to because they can't not pay attention to it," Atkins said.

"And they feel less good as they're trying to develop a good sense about their own bodies. The sexualised aspect just makes them feel like they're only good if they are objectified.

"And it's all so subtle, for a child anyway. We parents and adults look at this and say, 'Oh my gosh, this is so blatant, but in fact it's subtle because kids are playing with these things and then they look in the mirror," Atkins stated.

A spokesman from Mattel argued that the dolls, which are popular with children as young as five, demonstrate that it is OK to be different.

"Clawdeen Wolf is the teenage daughter of a werewolf. In the webisodes, she has to shave and wax and pluck between classes.

"Girls of a certain age know about the embarrassment of unwanted hair in unwanted places," she stated.

The eight Monster High dolls each have different stories based on the idea that they are the teenage children of famous monsters such as Dracula and Frankenstein.

They are said to be Mattel's answer to Bratz, or Disney's Fairies, all of which have been accused of being over sexualised.

Psychiatrist Dr Gails Saltz said that she believes such toys are as dangerous as violent video games and PG-13 films.

More than two decades since the last Barbie rolled off the assembly line in Taiwan, nostalgic former factory workers are preserving her memory by tailoring exquisite dresses for the iconic doll.
Advertisement
Advertisement
This site uses cookies to deliver our services.By using our site, you acknowledge that you have read and understand our Cookie Policy, Privacy Policy, and our Terms of Use  Ok, Got it. Close
×