Researchers have found a novel mechanism that spots and repairs a common form of DNA damage called alkylation.

Researchers at Vanderbilt University, Pennsylvania State University and the University of Pittsburgh have discovered a fundamentally new way that DNA-repair enzymes detect and fix damage to the chemical bases that form the letters in the genetic code.


"There is a general belief that DNA is 'rock solid' - extremely stable," said Brandt Eichman, associate professor of biological sciences at Vanderbilt, who directed the project.


"Actually DNA is highly reactive," Nature quoted him as saying.

A number of environmental toxins and chemotherapy drugs are alkylation agents that can attack DNA.

When a DNA base becomes alkylated, it forms a lesion that distorts the shape of the molecule enough to prevent successful replication.

Human cells contain a single glycosylase, named AAG, that repairs alkylated bases. It is specialized to detect and delete "ethenoadenine" bases, which have been deformed by combining with highly reactive, oxidized lipids in the body.

However, AAG also handles many other forms of akylation damage. Many bacteria, however, have several types of glycosylases that handle different types of damage.

"It's hard to figure out how glycosylases recognize different types of alkylation damage from studying AAG since it recognizes so many. So we have been studying bacterial glycosylases to get additional insights into the detection and repair process," said Eichman.

That is how they discovered the bacterial glycosylase AlkD with its unique detection and deletion scheme.

The new repair mechanism may also prove to be the key to understanding the differences in the way that the repair enzymes identify and repair toxic and mutagenic lesions.

The discovery is reported in an advanced online publication of the journal Nature on Oct. 1. 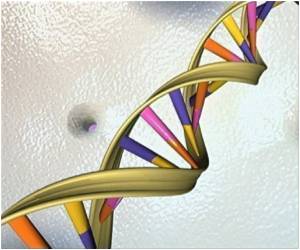 DNA Damage During Replication Prevented by Guardian Protein
A protein in yeast that safeguards the yeast cells' genome during replication, researchers have found.
READ MORE

Biochemical Switch Behind Nerve Cells Response To DNA Damage Unveiled
Researchers from Emory University of medicine have claimed the identification of a biochemical switch, which is required for nerve cells to respond to DNA damage.
READ MORE