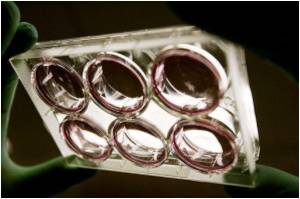 The Queensland Institute of Medical Research (QIMR) and the Royal Brisbane Women's Hospital reported the case of a young NSW woman who had been routinely and mysteriously ill, needing hospital care.

Having spent her late teenage years in and out of hospital, Katie Pulling had almost given up hope.

With no options left Katie agreed to an experimental stem cell transplant - a transplant which ultimately saved her life.

Dr Maher Gandhi head of QIMR's Clinical Immunohaemotology Laboratory, said: "Katie presented with a range of symptoms when she was eleven. No one could identify her condition and no treatment had been successful. She did not respond to regular treatments and she continued to get sick, often complicated by life-threatening infections."

The key to unlocking the reason for Katie's reoccurring symptoms came when she contracted the common teenage virus that causes glandular fever.

Usually most people come down with only a mild infection. However, Katie developed a full-blown version known as fulminant infectious mononucleosis (FIM).

"This is an incredibly rare, life threatening disorder characterised by fever, a massive spleen and destruction of the patient's blood cells. We realised the FIM was linked to her other reoccurring medical problems. The signals in Katie's immune system were not functioning normally. This meant her immune cells could not communicate with each other properly," said Gandhi.

The only treatment was to replace her immune system.

"We contacted Dr Glen Kennedy, an expert in bone marrow stem cell transplantation at the Royal Brisbane Hospital, to see if this might offer a cure," Gandhi said.

"The transplant was dangerous, but the results were amazing. The defect in Katie's immune cells has been fixed. To our knowledge this is the first time this disorder has been reported. We hope this will help anyone who has presented with the same symptoms and had no success with treatments," Gandhi added. (ANI)

Stem Cell Transplant Patients May be Protected from GVHD by Statins
A new study by researchers at Fred Hutchinson Cancer Research Center has revealed that statins may protect stem cell transplant patients from graft-versus-host disease, or GVHD.
READ MORE