Systemic sclerosis, also called scleroderma, is an autoimmune disease that causes scar-like thickening of the skin and internal organs, such as the kidneys and lungs. It affects about 100,000 people in the United States.

Researchers at the Stanford University School of Medicine and six other institutions have designed a new diagnostic tool for this rare and deadly autoimmune disease.


By measuring the activity of genes in tiny skin samples, the researchers were able to predict disease progression in patients as much as a year earlier than clinicians who used standard methods for evaluating patients.


‘By measuring the activity of genes in tiny skin samples, researchers were able to predict scleroderma progression in patients as much as a year earlier than clinicians who used standard methods.’

The cause of systemic sclerosis is unknown, and there are no drugs approved by the Food and Drug Administration for treating it. Many patients are given drugs that are approved for use in other diseases, but each drug is clinically effective in only a fraction of patients.

To find out if a patient is responding to treatment, clinicians use a test called the modified Rodnan skin score, in which a doctor pinches the skin to see how thick it is. For the test, the physician squeezes the patient's skin in 17 places, rating the thickness of each pinch of skin on a scale of zero to three and adding the scores together for a maximum score of 51.

"It's a very crude measure," Khatri said. He noted that despite careful training, doctors may give the same patient different scores.

Different physicians evaluating the same patients may agree only 60 to 70 percent of the time, Hinchcliff said. "It has always embarrassed me to pinch a patient's skin in 17 areas to try and accurately assess the degree of skin fibrosis. In this day and age, it would seem we should be more precise," she said.

The team used publicly available patient data shared by hospitals across the United States to search for a set of genes whose activity would mark the progression of systemic sclerosis, or SSc.

Gene expression is the process by which cells extract information from genes and render it as molecules of protein or RNA. Cells have the capacity to express more or less of each molecule, creating a pattern of expression that changes according to the presence of infections or of autoimmune diseases such as SSc. Khatri and his team identified 415 genes whose expression changed in a pattern that indicated how serious a person's SSc had become.

The researchers were able to use these gene-expression patterns as the basis for a test, which they called the SSc Skin Severity Score, or 4S. They used SSc patient data from two clinical centers to identify the 415 genes, and data sets from patients from five additional centers to validate the new test. They also included data from healthy participants who served as controls.

Getting results a year earlier

The team looked at data from a cohort of Northwestern University patients who had been tested repeatedly with the skin pinch test while being treated with a drug. The 4S test -- applied to this preexisting set of patient data -- could distinguish patients who were improving from those who were not 12 months after their treatment began. In contrast, the doctors' skin pinch test from the same set of data took 24 months to identify which patients were improving.

Clinical trials, as opposed to retrospective studies looking at pre-existing data, are needed to validate the 4S test, the researchers said. But if it works as well as Khatri and his collaborators hope, clinicians may be able to evaluate patients' response to treatments much more quickly, so they can be switched to some other treatment that may work. The test could also help advance the search for better therapies.

"And what was really cool was that we could predict on an individual level which patients would get better or worse," Khatri said.

The 4S test is an example of Stanford Medicine's focus on precision health, the goal of which is to anticipate and prevent disease in the healthy and precisely diagnose and treat disease in the ill.

The study also uncovered a gene-activity signal suggesting the involvement of epidermal growth factor receptors in the disease, a fact that was previously unknown, said Khatri. EGFR is important in cell division and plays a role in cancer and other diseases. In SSc, "we showed that EGFR is consistently upregulated," Khatri said. And, he added, drugs that have been approved by the FDA for treating EGFR-related conditions may turn out to be useful in treating patients with systemic sclerosis.

Soon, he said, his team will begin giving EGFR-inhibiting drugs to mice with a sclerodermalike condition to see if it helps.

"It's very exciting," said Khatri. "This is a disease that has stumped people for more than 25 years." 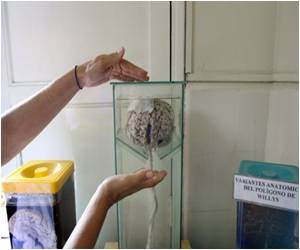 Victim of Both Raynauds Syndrome and Systemic Sclerosis Needs Special Treatment for Her Skin
Forty-year-old Nicola Whitehill from Southport, Merseyside works as a lawyer in England but she suffers from a condition called Raynaud's syndrome and systemic sclerosis
READ MORE