New Dermal Tattoo Sensors can Sense the Skin Within: Study 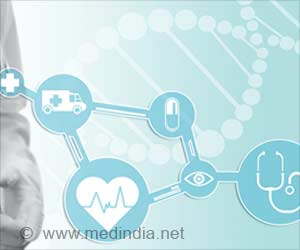 Permanent dermal sensors developed can be now applied as artistic tattoos, which can help detect blood pH change and metabolite levels, reveals a new study. The findings of the study are published in the journal Angewandte Chemie International Edition.

A colorimetric analytic formulation was injected into the skin instead of tattoo ink. The pigmented skin areas varied their color when blood pH or other health indicators changed.

A tattooist places ink directly in the dermis, a roughly one-millimeter-thick layer of tissue that hosts nerves, blood vessels, and hair follicles. The tattoo needle punctures the epidermis, the uppermost layer of skin, and releases the pigments into the dermis below, where the pigments stain the skin permanently.


Using tattoos for diagnostic rather than cosmetic purposes is a new concept. Researcher Ali K. Yetisen, who works at the Technical University of Munich, Germany, and his colleagues thought the technique could be helpful to place sensor formulations at spots in the body where they can record changes in metabolic substances directly, without any spatial distance or time delay, and perhaps for a very long period of time.
Advertisement
The researchers then identified and adapted three colorimetric chemical sensors that produce a color change in response to biomarkers. The first sensor was a rather simple pH indicator consisting of the dyes methyl red, bromothymol blue, and phenolphthalein. If injected into a model skin patch a piece of pig skin the resulting tattoo turned from yellow to blue if the pH was adjusted from five to nine.

The other two sensors probed the levels of glucose and albumin. Albumin is a carrier and transport protein in the blood. High glucose levels in the body may indicate diabetic dysfunction, whereas falling albumin levels can indicate liver or kidney failure.

The glucose sensor consisted of the enzymatic reactions of glucose oxidase and peroxidase, which, depending on the glucose concentration, led to a structural change of an organic pigment, and a yellow to dark green color change. The albumin sensor was based on a yellow dye that, upon association with the albumin protein, turned green.

The scientists then applied several sensor tattoos onto patches of pig skin. When they changed the pH or the glucose or albumin concentrations, the colors of the decorated areas changed accordingly. They quantified these visible effects by evaluating the colors with a simple smartphone camera and an app.

The authors claim that such sensor tattoos could allow permanent monitoring of patients using a simple, low-cost technique. With the development of suitable colorimetric sensors, the technique could also extend to recording electrolyte and pathogen concentrations or the level of dehydration of a patient. Further studies will explore whether tattoo artwork can be applied in a diagnostic setting.

Source: Eurekalert
Advertisement
<< Twitter and AI can See Who is Hitting the Gym: Study
Lowered Muscle Health in Menopause >>

Smart Suit With Textile Sensors For Health Monitoring
The suit is linked to a cellphone, a computer, or even to a doctor's computer through wireless ......

Harmful Effects of Tattoos
Tattoos can cause problems ranging from mild allergies to the deadly AIDS. Therefore take precaution...