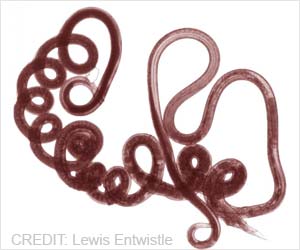 Nearly a third of the world's population and livestock are affected by intestinal worms. A new mechanism discovered aids in killing these intestinal worms, reveals a new study.

The worm-killer is an enzyme that is thought to disrupt vital cell processes in intestinal worms. Although scientists have previously known how worms are expelled from the body through the gut, this is the first time that a mechanism of worm killing has been discovered.


"If we can figure out how the enzyme is regulated, increasing the amount may promote immunity to intestinal worms," says Lewis Entwistle, first author of the paper and researcher at the Francis Crick Institute.
Advertisement
The research was led by the Francis Crick Institute, in collaboration with the London School of Hygiene and Tropical Medicine, the University of Cincinnati College of Medicine, and Genentech Inc.

The team first suspected that this enzyme might have a role in killing intestinal worms when mice that are immune to worm infections were found to have sustained high levels of the enzyme.

When they knocked out the gene in mice, so that they didn't make the enzyme, intestinal worms were not killed and expelled from the body as normal. But when they pre-treated worms with the enzyme before infection, killing and expulsion from the mice was restored.

Mark Wilson, senior author of the paper and Group leader at the Francis Crick Institute, says: "Building up the armory is pointless, without the right bullet. The immune system certainly plays a role in getting rid of intestinal worms, but this enzyme is the 'bullet' that kills them.

"There is an emerging problem of drug-resistant worms, and a need for better vaccines against them. Our findings provide a new avenue for developing novel drugs and vaccines, to combat the infections."

"Designing drugs that mimic the effect of the enzyme on intestinal worms could also be a fruitful avenue for combating worm infections," says Lewis.

Ascariasis
Ascariasis is a parasitic infection caused by roundworm or Ascaris lumbricoides. It causes ......

Roman Toilets Had No Clear Health Benefits, Led to Gradual Rise in Intestinal Worms
A new study has revealed that intestinal parasites gradually increased in Roman times rather than .....