New Dads Can Get Baby Blues Too! 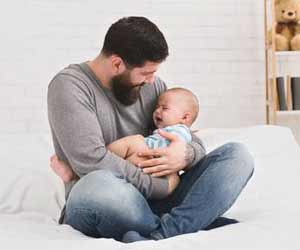 New fathers can also experience postpartum depression, reports a new study. Rates of depression among new dads are alike to those among new moms. The findings of the study are published in the Journal of Family Issues.

It's increasingly common to hear about new moms suffering from the baby blues. But what about new dads?

Advertisement
‘Although postpartum depression (PPD) is common and well-studied in mothers, dads rarely make it to this discussion. A new study finds that many fathers also experience PPD symptoms.’
Read More..

A new UNLV study offers an in-depth view of new fathers' experiences with postpartum depression (PPD). The study explores issues they encounter and how they can move beyond barriers they face in receiving diagnoses and treatment of the little-known phenomenon.


Between 5 and 10 percent of new fathers in the United States suffer from PPD, according to U.S. Centers for Disease Control and Prevention data. One study shows that the risk goes up to 24 to 50 percent for men whose partners suffer from PPD.
Advertisement
A team of researchers, led by UNLV Couple and Family Therapy professor Brandon Eddy, scoured blogs, websites, forums, and chat rooms for first-hand accounts from new dads. Six themes emerged:


Overall, the findings complement previous studies on barriers for fathers suffering from PPD. UNLV researchers said encountering a lack of information and stigma often causes dads to distance themselves from their child and has been associated with marital difficulties.

Previous research elsewhere has found that paternal involvement has many positive outcomes for children, such as boys displaying less hostile behavior than children with absent dads, reduced delinquency for both sexes, considerably higher IQ scores for children in their early development years, and lower levels of emotional distress. That's on top of studies showing fathers who suffer from PPD report lower levels of communication with their partners, as well as increased rates of substance abuse and domestic violence.

"Because men are already less likely than women to seek professional help for depression, it is vital that the stigma of PPD decreases," they added. "Because paternal involvement is a significant factor in the healthy development of children, it would seem wise to make information about paternal PPD more available to combat its negative impact on families."

The U.S. Preventative Services Task Force an independent coalition of national experts recently recommended that all women be screened for depression before and after giving birth. There is no current assessment designed to specifically screen men for PPD.

"With the vast amount of research conducted on the importance of paternal involvement and the rising rates of PPD in fathers," researchers wrote, "it seems logical that fathers should also be included in this recommendation."

Source: Eurekalert
Advertisement
<< 50 is the New 40 for Safe Childbirth, Say Researchers
Being Nice To Your Doctor Doesnt Hurt, It May Actually Imp... >>

How to Reduce Postpartum Depression After Delivery?
Better pain management measures following delivery can lower the risk of postpartum depression ......

Postpartum Depression is Less Likely to Occur in Women Delivering Babies in Winter
The postpartum depression risk might be greater in women who had delivered in the winter season ......

Postpartum Depression and Anxiety Differ from Other Mood Disorders
Mood disorders during the postpartum period are neurobiologically distinct from these disorders at ....