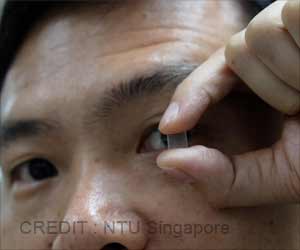 Newly developed contact lens patch with microneedles can treat eye diseases such as glaucoma and macular degeneration effectively and painlessly, reports a new study. The findings of the study are published in the journal Nature Communications.

Nanyang Technological University, Singapore (NTU Singapore) scientists have developed a 'contact lens' patch with microneedles that could provide a painless and efficient alternative to current methods of treating eye diseases such as glaucoma and macular degeneration.

Glaucoma is a group of disorders involving the optic nerve, often associated with a rise in intraocular pressure. Uncontrolled glaucoma can lead to blindness.
Advertisement
‘Newly discovered contact lens patch can help treat eye diseases such as glaucoma and macular degeneration. The microneedles on the eye patch can be loaded with drugs. Worn like contact lenses, the patch is painless and minimally invasive.’
Read More..

Current localized treatment methods such as eye drops and ointments are hindered by the eye's natural defenses, blinking, and tears. Eye injections can be painful and carry a risk of infection and eye damage. As a result, some patients are unable to keep up with the prescribed regime for their eye ailments, many of which require long-term management.


The proof-of-concept patch, successfully tested in mice, is covered with biodegradable microneedles that deliver drugs into the eye in a controlled release. After pressing it onto the eye surface briefly and gently - much like putting on contact lenses - the drug-containing microneedles detach by themselves and stay in the cornea, releasing the drug over time as they dissolve.

A contact lens is an artificial lens placed on the cornea for refractive, treatment or diagnostic purposes. Learn the best tips to be safe with them.
Advertisement
When tested on mice with corneal vascularisation, a single application of the patch was 90 percent more effective in alleviating the condition than applying a single eye drop with 10 times more drug content.

Professor Chen, the biotechnology expert behind the fat-burning microneedle patch, said this approach could realize the unmet medical need for a localized, long-lasting and efficient eye drug delivery with good patient compliance.

He said, "The microneedles are made of a substance found naturally in the body, and we have shown in lab tests on mice that they are painless and minimally invasive. If we successfully replicate the same results in human trials, the patch could become a good option for eye diseases that require long-term management at home, such as glaucoma and diabetic retinopathy.

"Patients who find it hard to keep up with the regime of repeatedly applying eye drops and ointments would also find the patch useful as well, as it has the potential to achieve the same therapeutic effect with a smaller and less frequent dosage."

Prof Chen added that the patch could also help to tackle the rising disease burden of eye conditions. A local 2018 study projected that patients with eye diseases in Singapore will rise significantly by 2040, with glaucoma, diabetic retinopathy and age-related macular degeneration cases set to double.

Currently, localized treatment options are hampered by the eye's physiological and structural barriers, including blinking and tears that wash out any drugs applied directly to the eye's surface.

Topical drugs such as eye drops and ointments require repetitive applications with high dosage as less than 5 percent of the drug is absorbed by the eye each time, and the drug is quickly cleared out by the eye.

Conventional eye injections can penetrate the surface barriers, but face the same problem or poor drug retention due to the backflow of injected solution and subsequent tear wash-out. Aside from carrying a risk of infection or permanent eye damage, patient compliance is poor due to pain and the need for frequent clinic visits.

Prof Chen added, "These two current methods only produce a burst release of drug with a short effective duration. This is not ideal, especially when treating chronic progressive eye diseases that require slow and sustained treatment, such as glaucoma."

To tackle these problems, the team developed a 2mm by 2mm patch with nine microneedles that can be loaded with drugs for lab tests on mice.

Each needle, thinner than a strand of hair, is shaped like a pyramid for optimal tissue penetration. The needle is made of hyaluronic acid, a substance found in the eye and is used often in eye drops. A modified version of the hyaluronic acid is added to form a second layer of the needle to slow down the rate at which the needle degrades, ensuring a slower release of the drug.

Dr. Aung Than, NTU research fellow at SCBE, then planned and conducted experiments over a week on mice with corneal vascularisation, a sight-threatening condition where new blood vessels grow into the corneal tissue due to oxygen deprivation. In this study, the researchers loaded the microneedles with DC101, an antibody that targets the growth factor that promotes blood vessel formation.

There was also no puncture found on the cornea after a week, suggesting that the microneedles are strong enough to penetrate the cornea, but not too stiff to spear through the whole cornea.

Prof. Chen said the team has filed a patent, and is currently working on further improving the eye patch technology. They are also looking to partner clinician scientists to study the feasibility of conducting medical trials.

Age related macular degeneration is a disease of the elderly, wherein the macula or the central part of the retina gets affected, leading to loss of vision.
Advertisement
<< Mom or Dad: Whose Lifestyle Changes Affect Their Childs Wei...
Brain Uses Two Clocks to Predict the Future >>