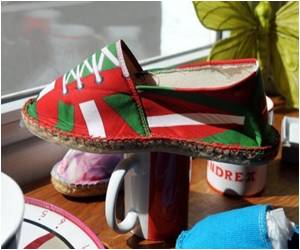 A new computer program developed by forensic scientists analyzes footwear marks left on a crime scene. According to a team from the University at Buffalo, New York, footwear marks are found at crime scenes much more commonly than fingerprints.

They point out that while footprints are common they are often left unused by forensic scientists because marks may be distorted, only a partial print may be left and because of the vast number of shoe shapes and sizes.

Craigslist Killer Case and the Role of Computer Forensics

However, matching a footprint at a crime scene can quickly narrow the number of suspects and can tie different crime scenes to the same perpetrator even if other evidence is lacking.


The team, Yi Tang, Harish Kasiviswanathan and Sargur Srihari, has developed a way to group recurring patterns in a database of footwear marks to that the clustered data can be searched and compared to suspect prints much more quickly than by other techniques whether manual or computer-based.

Pharmacogenetics testing offers way to prevent adverse drug reactions or even toxicity.
Advertisement
The team explains that geometric shapes including line segments, circles and ellipses can be the focus and allow the footwear to be quickly identified using an "attributed relational graph" or ARG.

The attributes for every shape are defined in a way to provide scaling, rotation and translation invariance, the researchers explain. The team adds that the introduction of a measure of how different two marks might be, which they refer to as the footwear print distance (FPD) allows them to home in on a particular boot or shoe even if the recorded print is noisy or degraded perhaps by perpetrator retracing their steps or other marks present at the scene.

They have successfully tested their approach against the currently used footwear print retrieval systems used in forensic science.

The study has been published in the International Journal of Granular Computing, Rough Sets and Intelligent Systems.