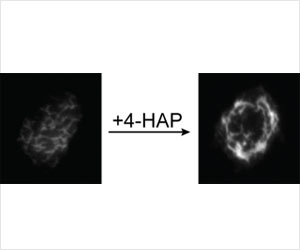 They devised a way of screening compounds for the desired effect and have identified a compound that shows promise in fighting pancreatic cancer. Their study appears this week in the early edition of the Proceedings of the National Academy of Sciences.
Advertisement

"This is a novel approach to cancer therapy that we believe could fight the disease with less potential for side effects and drug resistance than many current drugs," says Douglas Robinson, Ph.D., a professor of cell biology in the Institute for Basic Biomedical Sciences at Johns Hopkins University School of Medicine. "We think the new screening system we devised will help identify drugs for many other diseases, as well."


The roots of the project go back to 1997, when Robinson, then a postdoctoral fellow, says he first had the idea that better understanding how a cell divides into two would shed light on how cells change shape in general.
Advertisement
Since changes in cell shape figure into conditions from cancer to chronic obstructive pulmonary disease to degenerative nerve diseases, compounds that affect cells shape could turn out to stall disease progress.

In 2008 Alexandra Surcel, Ph.D., lead author of this study, joined Robinson's laboratory as a postdoctoral fellow and began working on a screen for molecules that tweak cell shape.

Most drug screens look for an effect on a specific biochemical "pathway" that has been linked to disease; by contrast, Surcel explains, this screen is based on the end result for a whole cellin this case, the amoeba Dictyostelium, which closely resembles a number of mammalian cell types. After treating the cells with a molecule, Robinson's team looked for out-of-the-ordinary numbers of cells with two or more nuclei.

Since Dictyostelium normally have two nuclei only when they are in the process of dividing into two daughter cells, a high proportion of cells with more than one nucleus would indicate that the molecule had thrown a wrench in the process of cell division, likely by tweaking the mechanics of the cell skeleton.

A screen of thousands of molecules turned up 25 with the effect the team was looking for. Further studies revealed that one of them, 4-HAP, affected myosin II, a building block of the cell skeleton. In collaboration with another Johns Hopkins lab, led by Robert Anders, M.D., Ph.D., an associate professor of pathology, Robinson's group identified changes in the amount of myosin II in pancreatic cancer cells as they spread from the original tumor into other areas of the body, a crucial step in progression of the disease.

The research team tested 4-HAP on lab-grown pancreatic cancer cells and found that it affected the myosin in their skeletons in a way that made them harder. "We think that being relatively soft lets invading cancer cells slip through the body and colonize new areas," Surcel says. "You can envision an octopus having a much easier time getting through a small opening than would a lobster. 4-HAP seems to make the cancer cells more like the lobster."

The team is now testing 4-HAP in mice. The drug is already in use in some countries as a treatment for jaundice, so if it shows success against pancreatic cancer, it could potentially make it to market relatively quickly, Robinson says. But even if that doesn't happen, the study demonstrates that the new drug screen has great potential, he says.