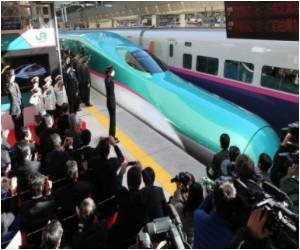 Hayabusa or Falcon, Japan's latest bullet train made its debut. It can travel at a speed of 300 km per hour. This bullet train offers travelers a faster, luxurious and comfortable travel.

Japan has built up a network of cutting-edge Shinkansen train lines since the 1960s that criss-cross the island nation and now hopes to sell the infrastructure technology abroad, including to the United States.

Shall we take the eight o'clock air train to Paris? It may sound strange to say now, but such jargon is likely to become commonplace someday -- if aviation futurists are right in their predictions.
Advertisement

The latest ultra-fast tech-marvel makes two trips a day from Tokyo to Aomori, a scenic rural backwater on the northern tip of the main Honshu island that has until now been off Japan's bullet train map. It also makes one more trip a day to Sendai, located between Tokyo and Aomori.

Simple Tips On Not Losing Balance in Buses And Subway Trains

A team of researchers in Canada have discovered how standing subway and bus riders can avoid toppling over with every start and stop of the vehicle.
Advertisement
The mood at the launch was dampened slightly by a seven minute delay to the first service after a passenger fell from the platform at Tokyo station, according to station officials. The train was not moving at the time.

Passengers will glide quietly along the straight stretches and tunnels that cut through Japan's mountainous countryside, said operator East Japan Railway Co, which has heavily promoted the launch of the new service.

Those willing to pay 26,360 yen ($320) for a one-way trip can enjoy the comfort of a 'GranClass' car, where a cabin attendant will serve them drinks and food in their deeply reclining leather seats on thick woollen carpets.

To promote the service, the train company has also heavily advertised Aomori as a tourist destination, praising its landscape, seafood and winter snow.

Japan's ultra-fast, frequent and punctual bullet trains have made them the preferred choice for many travellers, rather than flying or road travel, ever since the first Shinkansen was launched in time for the 1964 Tokyo Olympics.

But as Japan, and its railway companies, struggle with a fast-greying and shrinking population and falling domestic demand, the government and industry are aggressively seeking to promote the bullet trains abroad.

Japan has in the past sold Shinkansen technology to Taiwan and hopes to capture other overseas markets, such as Brazil and Vietnam, but faces stiff competition from train manufacturers in China, France and Germany.

The biggest prize is a future high-speed US rail network that President Barack Obama has promoted, to be backed by 13 billion dollars in public funding.

California's then-governor Arnold Schwarzenegger was treated to an early test ride on the Hayabusa when he visited Japan in September.

Japan says its trains boast a strong safety record: despite running in an earthquake-prone country, no passenger has ever died due to a Shinkansen derailment or collision -- although people have committed suicide by jumping in front of the trains.

Japan has also been developing a magnetic levitation or maglev train that, its operator says, reached a world record speed of 581 kilometres per hour in 2003 on a test track near Mount Fuji in Tsuru, west of Tokyo.

The plan is to launch maglev services between Tokyo and the central city of Nagoya by 2027. By 2045 they are expected to link Tokyo with the main western city of Osaka in just one hour and seven minutes, compared with the current two hours 25.

Trains in Britain are being fitted with giant heated condoms in a bid to thaw them out and keep them moving.
Advertisement
<< Lab-Grown Brain Cells Prone to Alzheimer's Attack Developed
Gay and Lesbian Mardi Gras Parade in Sydney >>

Drug Side Effects Calculator Selfie Addiction Calculator Sinopril (2mg) (Lacidipine) Find a Hospital Diaphragmatic Hernia Iron Intake Calculator Find a Doctor Color Blindness Calculator Blood - Sugar Chart Daily Calorie Requirements
This site uses cookies to deliver our services.By using our site, you acknowledge that you have read and understand our Cookie Policy, Privacy Policy, and our Terms of Use  Ok, Got it. Close
×