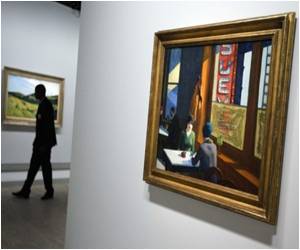 Jean-Luc Martinez, an expert in Greek sculpture was named as the new boss of the famed Louvre museum. He has been interviewed by the French President Francois Hollande himself.

The 49-year-old takes charge of one of the world's biggest museums and will oversee a number of projects including the controversial opening of a Louvre outpost in Abu Dhabi, the capital of the United Arab Emirates, slated for 2016.

The deal has stirred debate in the French art world with critics raising questions about Abu Dhabi's record on the treatment of dissidents and the immigrant workers employed on the construction of the new museum.


"The Louvre, it's my life, my childhood dream, my teenage passion," Martinez told AFP after his nomination at the head of the museum, which attracts some 10 million visitors a year.
Advertisement
France's culture minister had reportedly leant towards appointing Sylvie Ramond, head of the Museum of Fine Arts of Lyon in southeastern France, who would have become the Louvre's first female director.

But in the end -- and after three finalists were interviewed in person by Hollande -- Martinez, director of the Louvre's department of Greek, Etruscan and Roman antiques since 2007, was finally chosen to head up the museum.

Born in 1964, Martinez comes from a modest background. His mother was a caretaker in a French apartment building, his father a postman, and they lived in a council estate just outside Paris.

He first visited the Louvre with his secondary school class and was blown away. It was "a real shock. It changed my life," he said. As a teen, he would often go to the museum, copying drawings of Greek vases.

He went on to pass his high school exams with flying colours, studied history, history of art and archaeology at university, worked as a history and geography professor and an archaeologist in Greece before joining the Louvre in 1997.

Martinez speaks Latin, ancient and modern Greek, English and Spanish, as well as a little Italian and German. He has also started learning Japanese.

He succeeds Henri Loyrette, who has been credited with doubling visitor numbers from five million per year when he took over in 2001 to around 10 million this year -- half of them under-30s.

Loyrette also oversaw the opening in 2012 of the Department of Islamic Art and of a Louvre satellite branch in the former northern mining town of Lens, aimed at bringing high culture and visitors to one of France's poorest areas.

Culture minister Aurelie Filippetti recently told AFP that she wanted "a change from a logic of expansion of the Louvre", which could indicate an end to the opening of museum outposts such as the one planned in Abu Dhabi.

France Tops US in Women on Corporate Boards
According to a study, France has overtaken the United States in placing women on the boards of the ....

North Mali's Drinkers Toast France for Return of Beer
A cold beer is perhaps one of the best beverages to end the day....