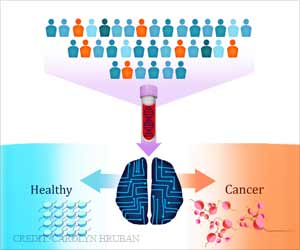 A simple blood test developed by Johns Hopkins Kimmel Cancer Center researchers detects the presence of seven different types of cancer by spotting unique patterns in the fragmentation of DNA shed from cancer cells and circulating in the bloodstream.

DELFI also performed well in tests of blood samples from 215 healthy individuals, falsely identifying cancer in just four cases. The test uses machine learning, a type of artificial intelligence, to identify abnormal patterns of DNA fragments in the blood of patients with cancer. By studying these patterns, the investigators said they could identify the cancers' tissue of origin in up to 75% of cases.

The crab that invades the breast is no more a fear factor with all the advancements that medical science and customized protocols can fight breast cancer. the recent developments in the management of breast cancer.
Advertisement
‘DELFI (DNA evaluation of fragments for early interception), accurately detected the presence of cancer DNA in 57% to more than 99% of blood samples from 208 patients with various stages of breast, colorectal, lung, ovarian, pancreatic, gastric or bile duct cancers in the U.S., Denmark and the Netherlands.’

A report on the research will be published online in Nature.


Blood tests, or so-called "liquid biopsies" for cancer detection typically look for mutations, which are changes in the DNA sequence within a cancer cell, or for methylation, a chemical reaction in which a methyl group is added to DNA, says senior study author Victor E. Velculescu, M.D., Ph.D., professor of oncology and co-director of the Cancer Biology Program at the Johns Hopkins Kimmel Cancer Center. But not all cancer patients have changes that are detectable using these methods, he says, and there is a great need for improved methods for early detection of cancer.

Are you suffering from a migraine? It is possible that you have an unhealthy bowel. Strange - but true! This quiz is packed with information on the colon. Participate to learn more!
Advertisement
DELFI, he says, takes a different approach, studying the way DNA is packaged inside the nucleus of a cell by looking in the blood at the size and amount of DNA from different regions across the genome for clues to that packaging.

Alessandro Leal, M.D., a lead author of the study and a Ph.D. candidate at the Johns Hopkins University School of Medicine, explains that the nuclei of healthy cells package DNA like a well-organized suitcase in which different regions of the genome are carefully placed in various compartments. By contrast, the nuclei of cancer cells are more like disorganized suitcases, with items from across the genome thrown in haphazardly.

"For various reasons, a cancer genome is disorganized in the way it's packaged, which means that when cancer cells die they release their DNA in a chaotic manner into the bloodstream," says Jillian Phallen, Ph.D., a lead author on the study and a Johns Hopkins Kimmel Cancer Center postdoctoral fellow. "By examining this cell-free DNA (cfDNA), DELFI helps identify the presence of cancer by detecting abnormalities in the size and amount of DNA in different regions of the genome based on how it is packaged."

The researchers caution that the test's potential must be further validated in additional studies, but if that happens it could be used to screen for cancer by taking a tube of blood from an individual, extracting the cfDNA, studying its genetic sequences and determining the fragmentation profile of the cfDNA. The genome-wide fragmentation pattern from an individual can then be compared with reference populations to determine if the pattern is likely healthy or derived from cancer.

Robert B. Scharpf, Ph.D., a senior author on the study and an associate professor of oncology, says that because the genome-wide fragmentation patterns may reveal differences associated with specific tissues, these patterns, when found to be derived from cancer, can also indicate the source of the cancer, such as from the breast, colon or lung.

DELFI simultaneously analyzes millions of sequences from hundreds to thousands of regions in the genome, identifying tumor-specific abnormalities from minute cfDNA amounts, says Scharpf. Using DELFI, investigators found that genome-wide cfDNA fragmentation profiles are different between cancer patients and healthy individuals. Stephen Cristiano, a lead author on the study and a Ph.D. candidate in the Johns Hopkins Bloomberg School of Public Health, says that in cancer patients, fragmentation patterns in cfDNA appear to result from mixtures of DNA released from both blood and tumor cells, and show multiple distinct genomic differences with increases and decreases in fragment sizes at different regions.

All cancer patient samples were obtained before any treatment, and the majority of the samples (183) were from people whose disease could be treated with surgical removal of the tumors. Overall, the researchers report, healthy individuals had similar fragmentation profiles, while patients with cancer had more variable fragmentation profiles that were less likely to match healthy profiles.

DELFI detected cancer in 73% of cancer patients overall, while misclassifying four of 215 healthy individuals (98% specificity). The test also was found to be 61%-75% accurate in identifying the tissue of origin of the cfDNA. When DELFI and mutation-based cfDNA analyses were combined, investigators could accurately detect 91% of cancer patients. Velculescu, Leal, Phallen, Scharpf, Cristiano and colleagues are in the process of scaling up their analyses to study DELFI's performance in thousands of samples. "We're encouraged about the potential of DELFI because it looks at a completely independent set of cell-free DNA characteristics from those that have posed difficulties over the years, and we look forward to working with our collaborators worldwide to make this test available to patients," Velculescu says.

Because the test is easy to administer and employs simple and inexpensive laboratory methods, Velculescu expects that the test could ultimately be more cost-effective than other cancer screening tests, including other current cfDNA tests.

What are your chances for developing some common cancers in your lifetime - find out now.
Advertisement
<< High-visibility Wear: Key to Reduce Vehicle-cyclists Collisi...
Youth Suicides After 13 Reasons Why Examined >>