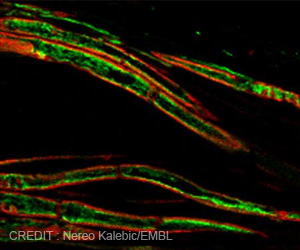 Patients with chronic pain can benefit from a new approach that produces painkillers, which specifically treat chronic pain. The new avenue was found by scientists at EMBL and the Werner Reichardt Centre for Integrative Neuroscience (CIN) at the University of Tübingen.

In the study published in eLife, they discovered how the stiffness of our nerve cells influences sensitivity to touch and pain.

Frequent, Longer Use of Pain Killers Can Diminish Hearing In Women

Higher frequency use of ibuprofen and acetaminophen are associated with higher risk of hearing loss in men and younger women.
Advertisement
‘Small molecules that interfere with the stiffness the nerve cell could be the new target to produce painkillers to treat mechanical pain.’

"Being able to stop this mechanical pain could be very powerful, and it's something that current drugs are not very good at doing," says Paul Heppenstall, who led the work at EMBL.


Whether it's a light brush or a painful poke, when something touches you, receptors on the nerves under your skin sense it and carry that information to the brain. To be more precise, those receptors detect - and respond to - the bending of the nerve cell's membrane. The EMBL scientists have now discovered a molecule which, by influencing how stiff or bendy a nerve cell is, affects how sensitive a mouse is to touch and pain.

Understanding About Sensory Organs in Fingertips may Help Fight Pain

Mechanical transduction at Merkel discs initiates primarily in the Merkel cells. A new ion channel in the Merkel cells called Piezo2 is the mechanical transducing molecule.
Advertisement
Heppenstall and colleagues genetically engineered mice so that they could not produce a molecule called Atat1. Working with Jing Hu's lab at CIN and Laura Andolfi at Istituto Officina dei Materiali-CNR, in Trieste, they found that the nerve cells in the affected mice became more stiff, and they became insensitive to light touch and to mechanical pain. This happened both when they prevented all of a mouse's cells from producing the molecule and when they did so just in the mouse's sensory neurons.

The Atat1 molecule is present in all cells. Scientists know that it modifies microtubules - tiny tubes that act as transport network and scaffolding inside cells - and that this happens in all cells, especially in nerve cells. So Heppenstall, Hu and colleagues were surprised to find that the other senses seem not to be affected in the mice.

"It could be that the molecule also affects the stiffness of nerves involved in other senses, but because stiffness is not important for detecting smells or tastes, for example, changes in cell stiffness might not have a detectable effect on those senses," says Shane Morley, who carried out the work at EMBL.

One difference that the scientists found between nerve cells that detects touch and other cells are in how their microtubules are arranged. In sensory cells, they form a ring just below the cell membrane. In other cells, they don't. The scientists think that this ring probably fine-tunes how stiff or bendy a nerve cell's membrane is, influencing how sensitive that cell - and the animal in general - is to touch.

The nervous system and sense of touch are similar in mice and humans, so the results likely hold true for people, too. And although problems in cell stiffness are unlikely to be at the root of most patients' hypersensitivity to the touch, controlling how stiff nerve cells are could nevertheless be an effective way of treating that sensitivity.

"We're now looking for small molecules that interfere with this fine-tuning of cell stiffness, and which might one day be used to make painkillers specifically to treat this mechanical pain," says Heppenstall.

"This is the first step in our sense of touch, so if we can stop the signal there, then we have a good chance of stopping everything which is downstream. And because only these touch-sensing nerve cells would be affected, there's hope that such a drug might not have many unwanted side-effects."

Celebrating Gujarat Foundation Day, a group of college students painted a 600-meter-long wall with slogans to inspire others to keep their city clean.
Advertisement
<< New Strategy to Improve Physical Therapy for People With Li...
Understanding the Link Between Triple Negative Breast Cance... >>

Chronic Pain Treatment Without Side Effects of Opioid Or Medical Marijuana

Find a Doctor Nutam (400mg) (Piracetam) Drug Side Effects Calculator Drug Interaction Checker A-Z Drug Brands in India Daily Calorie Requirements Blood - Sugar Chart Diaphragmatic Hernia Drug - Food Interactions Accident and Trauma Care
This site uses cookies to deliver our services.By using our site, you acknowledge that you have read and understand our Cookie Policy, Privacy Policy, and our Terms of Use  Ok, Got it. Close
×