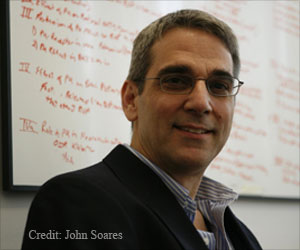 Stroke caused by blood clots may involve the use of tissue plasminogen activator (tPA) infusion which may help to dissolve the clots and restore blood flow. The treatment may carry the risk of bleeding and swelling in the brain and must be administered with three hours after the onset of stroke.

A research team from Joslin Diabetes Center has now demonstrated the potential of giving a drug in combination with tPA to improve treatment options for stroke.

Drugs that target a protein called plasma kallikrein, as well as an activator protein called factor XII, "may provide the opportunity to make tPA safer by reducing these complications and increasing its efficacy in opening blood vessels," says Edward Feener, Ph.D., corresponding author on a paper about the work published in the journal Blood.


About 800,000 people in the United States suffer a stroke each year, and about 87% are ischemic strokes, in which blood flow is blocked by a clot.

Stroke is a condition where an artery supplying blood to the brain tissues is ruptured causing the formation of blood clot in the brain and interfering with the supply of blood and oxygen to the brain
Advertisement
Fabrício Simão, Ph.D., who is lead author on the Blood paper, and colleagues in the Feener lab demonstrated that tPA boosts the activity of plasma kallikrein in both human and mouse plasma.

The Joslin scientists next experimented with mouse models in which blood clots were induced in the brain and then treated with tPA. Animals that were also given a plasma kallikrein inhibitor, and animals that were genetically modified to produce lower amounts of the protein, showed significantly less bleeding, brain swelling and damaged brain areas than control animals without plasma kallikrein blockade.

The researchers traced the biological mechanisms by which tPA activates plasma kallikren, via the Factor XII protein, which promotes coagulation. Plasma kallikrein is known to activate the kallikrein kinin system, a pathway that has been implicated in stroke complications including brain swelling and breakdown of the blood-brain barrier. (Previous studies by other investigators have shown that administration of tPA therapy to stroke patients activates the kallikrein kinin system in their blood.)

The Food & Drug Administration has approved a plasma kallikrein inhibitor for the treatment of hereditary angioedema. Additional inhibitors targeting this pathway are under development by multiple pharmaceutical companies for this genetic disease and other conditions, including diabetic macular edema. These new findings suggest additional potential therapeutic opportunities for plasma kallikrein inhibitors in thrombolytic therapy.

Mitochondria or powerhouses of the cell could be a good treatment strategy for recovery from a stroke of brain injury.

Find a Hospital Calculate Ideal Weight for Infants Drug Side Effects Calculator The Essence of Yoga Vent Forte (Theophylline) Nutam (400mg) (Piracetam) Loram (2 mg) (Lorazepam) A-Z Drug Brands in India Iron Intake Calculator Blood - Sugar Chart
This site uses cookies to deliver our services.By using our site, you acknowledge that you have read and understand our Cookie Policy, Privacy Policy, and our Terms of Use  Ok, Got it. Close
×