Pulmonary embolisms, the deadly blood clots in the lungs, can be ruled out by a newly identified "sliding scale" model. Researchers from Intermountain Medical Center in Salt Lake City say that it is more accurate than current diagnostic methods.

The new model, which factors in a patient's age, more accurately identifies a patient's risk of the often-deadly blood clots and can more easily rule out the need for additional, more invasive tests, helping to reduce unnecessary costs.


Pulmonary embolism is associated with more deaths annually than breast cancer, HIV/AIDS, prostate cancer, and motor vehicle accidents combined, which means it is important to get its diagnosis right so that proper treatment can be instituted.


"When patients come to the ER with the symptoms of a pulmonary embolism, we begin by doing a physical exam and identifying their previous medical history," said Scott Woller, MD, co-director of Intermountain Medical Center's Thrombosis Program, and the study's lead author. "Once we get that initial information, we often conduct a simple blood test called a d-dimer, which tests for proteins found in the blood when a clot is present. If the protein levels are above a certain threshold, we most often order a CT scan to confirm or rule out a pulmonary embolism. However, as we age, d-dimer levels naturally increase, which means when we test d-dimer in elderly patients, we often find an elevated result--even when a clot is absent. This is referred to as a false positive test."

The study identified more than 900 patients who came to an emergency department with symptoms of a pulmonary embolism and for whom d-dimer tests were ordered. Researchers determined that adjusting the threshold of d-dimer levels in correlation to a patient's age would accurately exclude a pulmonary embolism diagnosis without requiring the patient to receive additional testing.

"A CT scan is most often used to ultimately rule out a pulmonary embolism, however it delivers radiation to the patient and contrast dye," said Dr. Woller. "Elderly patients are at greater risk for inadvertent harm related to the CT scan, and the contrast dye may also impact kidneys function, plus the scan adds to the cost of the patient's care. If we can safely and accurately diagnose the patient's risk of a pulmonary embolism using this sliding d-dimer scale, we can eliminate the need for additional imaging tests."

Dr. Woller's research demonstrates that among patients older than 50, adoption of the age-adjusted cutoff would decrease the number of CT scans that would need to be performed by nearly 20 percent.

The sliding scale is currently being studied further, but the initial research adds to a growing body of evidence that this simple change may be a safe and efficient way to exclude the diagnosis of pulmonary embolism in a great number of patients. 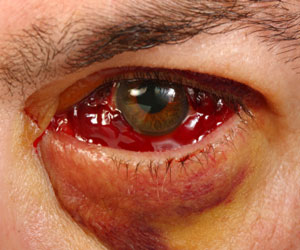