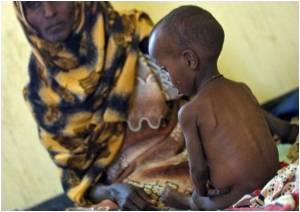 Scientists have suggested a new way to monitor the nutrition status and child mortality in developing countries. Based on dozens of surveys that has been carried out, changes in the number of underweight children could be used as an early-warning signal of underlying public health threats that are difficult to monitor in other ways, such as disease epidemics or changes in child feeding practices.

"Low body weight, in which nutrition plays a key role, is a well known symptom and also a cause of ill-health and mortality for children in developing countries. Observers and clinicians usually focus on the most severe cases, but for public health, the extent of mild underweight could be even more meaningful," said William A. Masters, a professor at the Friedman School of Nutrition Science and Policy at Tufts University.

"One reason is that there are so few children at the extremes and they are difficult to measure. Mild under-nutrition, which affects a much greater number of children, could be a powerful predictor of population health," he added.


Masters and colleagues examined 130 Demographic and Health Surveys (DHS) conducted in 53 African, Asian, and South American countries between 1986 and 2006.

"For an individual child, severe underweight is much worse than mild underweight. Mildly undernourished children face only a small increase in their own mortality risk. But when a lot of children fall behind, something dangerous could be happening, perhaps the spread of contagious disease, a worsening of water quality, or food shortages," he added.

Masters stressed that the results are just the beginning to opening up a new avenue of research.

The paper is published in the January issue of the journal Economics and Human Biology.

More Than 35% of Children in Delhi Slums are Malnourished: Survey

A survey conducted by National Family Health has found that 35.3% of children under the age of 5 years in Delhi slums suffer from malnutrition.
Advertisement
<< Famous Model Talks of Drug Past
Osteoporosis Treatment Boosts Longevity >>

Many Hospital Patients Malnourished In Australia

One in four hospital patients are malnourished in Australia, while hospital staff do not be seem aware of the problem at all.
Advertisement
News A-Z
A B C D E F G H I J K L M N O P Q R S T U V W X Y Z
What's New on Medindia