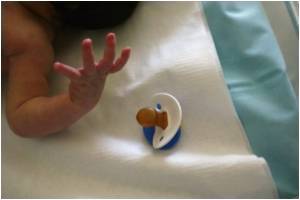 Administering the anti-retroviral drug nevirapine daily for six months to breastfeeding infants halves the risk of HIV transmission from the mother. Such a regimen works better than a six-week course, according to preliminary clinical trial data presented Wednesday.

The longer nevirapine regimen achieved a 75 percent reduction in HIV transmission risk through breast milk for the infants of HIV-infected mothers with higher T-cell counts who had not yet begun treatment for HIV.

The study was presented at the 18th Conference on Retroviruses and Opportunistic Infections (CROI) in Boston.


"Extended breastfeeding reduces infant mortality in places that lack safe, clean water by protecting babies from common childhood diseases because breast milk contains protective antibodies from the mother that formula feeding does not provide," says Anthony S. Fauci, M.D., director of the National Institute of Allergy and Infectious Diseases (NIAID), part of the National Institutes of Health, which funds the trial. "These findings show that giving the infants of HIV-infected mothers an antiretroviral drug daily for the full duration of breastfeeding safely minimizes the threat of HIV transmission through breast milk while preserving the health benefits of extended breastfeeding."

UNAIDS signed a partnership deal with several non-governmental organizations at the United Nations to work to eliminate HIV mother-to-child transmission in Africa.
Advertisement
The new findings apply to mothers and infants in developing nations, where infectious diseases such as gastroenteritis and pneumonia often pose a life-threatening risk to very young children. The U.S. Department of Health and Human Services recommends that HIV-infected mothers in the United States feed their babies with infant formula, not breast milk, because safe and affordable formula is available, infant deaths due to infections are low and only total avoidance of breastfeeding will completely protect these infants from HIV transmission through breast milk.

This advanced-stage clinical trial known as HPTN 046 is co-funded by NIAID, the Eunice Kennedy Shriver National Institute of Child Health and Human Development, the National Institute on Drug Abuse and the National Institute of Mental Health, all part of NIH. The HIV Prevention Trials Network and the International Maternal, Pediatric and Adolescent AIDS Clinical Trials Network are conducting the trial under the leadership of Hoosen Coovadia, M.D., M.B.B.S., of the University of the Witwatersrand in Durban, South Africa. Bonnie Maldonado, M.D., of Stanford University in Stanford, Calif., presented the study results for Dr. Coovadia on March 2, 2011, at CROI.

More than 1,500 mother-infant pairs in South Africa, Tanzania, Uganda and Zimbabwe are participating in HPTN 046, which began in February 2007 and will conclude in July 2011. The participating infants received daily nevirapine for the first six weeks after birth. Those infants who remained free of HIV then were assigned at random to receive either daily nevirapine or a placebo until six months after birth or the cessation of breastfeeding, whichever came first. Study investigators compared the rates of HIV infection in the two groups of infants, and evaluated and compared the safety and tolerance of nevirapine in the infants.

The percentage of infants who experienced serious health problems was nearly the same in both groups (17 percent in the six-week group and 19 percent in the six-month group). The great majority of these problems were infectious diseases not associated with nevirapine, such as diarrhea, malaria or pneumonia. Only 5 percent of the infants in each group had a health problem that required temporarily stopping daily nevirapine.

In addition, the HPTN 046 study team analyzed the impact of the mother's health and antiretroviral treatment on the benefit of providing daily nevirapine to breastfeeding infants for six months rather than six weeks. One group the investigators evaluated was the infants of mothers who had a T-cell count of at least 350 cells per cubic millimeter of blood, and who thus did not yet require antiretroviral therapy according to World Health Organization guidelines. In these infants, the six-month nevirapine regimen cut HIV transmission through breast milk by 75 percent relative to the six-week regimen.

In infants born to women with a T-cell count lower than 350 cells per cubic millimeter who received antiretroviral therapy for their own health, viral transmission to infants through breast milk was zero or nearly zero regardless of the duration of infant nevirapine.

HIV transmission through breast milk occurred at the highest rates among infants born to mothers who had a T-cell count lower than 350 cells per cubic millimeter but did not receive antiretroviral therapy even though they qualified for it. However, the difference in HIV transmission rates between the two infant drug regimens was not statistically significant.

The investigators will conduct their final analysis of the HPTN 046 study data after all infants have completed 18 months of follow-up this summer.