Neuroscientists Print 'Cells from The Eye' Using An Inkjet Printer 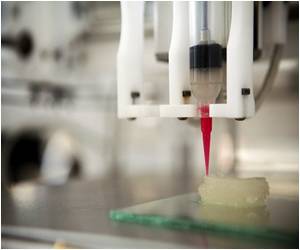 An inkjet printer was used by neuroscientists to print cells from the eye. This forms a practical step in the quest to grow replenishment tissue for damaged or diseased organs.

Researchers at England's University of Cambridge extracted two types of cells from rat retinas and sent them through a printer nozzle to see if they survived.

The cells remained healthy after being "printed," retaining their ability to survive and grow in culture, they reported in the British journal Biofabrication.


Three-dimensional printing is one of the new frontiers in engineering.

In that field, liquid or powdered polymers are substituted for ink. Sprayed in layers, the plastic forms a 3-D shape -- a boon for designers or exporters, for example, who want to show off a model of their product.
Advertisement
But biotechnologists are also interested in printing, given the potential it offers for building artificial tissue in layers.

This is the first time that the technology has been used to successfully print mature cells from the central nervous system, the scientists said. They cautioned, however, that much work lay ahead.

The co-authors, Keith Martin and Barbara Lorber of the university's John van Geest Centre for Brain Repair, said the hope was one day to build retinal tissue for people suffering from degenerative diseases of the eye.

"The loss of nerve cells in the retina is a feature of many blinding eye diseases," they said in a press release.

"The retina is an exquisitely organised structure, where the precise arrangement of cells in relation to one another is critical for effective visual function."

The team used a piezoelectric inkjet printer head, which expelled so-called glia cells and retinal ganglion cells from adult lab rats through a single nozzle less than one millimetre (0.04 of an inch) across.

The feat is important, because inkjet fluid has a narrow margin of error in terms of viscosity and surface tension. Adding cells to the liquid "complicates its properties significantly," said inkjet engineer Wen-Kai Hsiao.

The only hitch was a large loss in the number of cells through sedimentation, meaning that they tended to sink to the bottom of the fluid reservoir and could not be printed.

But the cells that were printed were undamaged and sound. The delicate cellular membranes survived, despite the high speed at which they were ejected.

The next steps will be to see if other retinal cells, including light-sensitive photoreceptors, can be successfully printed and experiment with commercial print heads, which use multiple nozzles.

Source: AFP
Advertisement
<< UN Reveals Millions of Tonnes of Toxic 'E-Waste' is Dumped ...
Researchers: Manner In Which Regret Is Expressed Decides It... >>