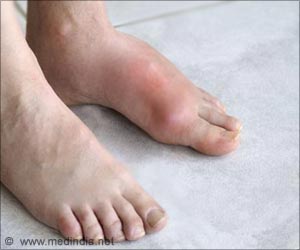 Edema (fluid accumulation and swelling) may result from the malfunctioning of regulatory processes controlling vessel permeability in the body. Edema frequently occurs in chronic inflammatory diseases including psoriasis and eczema.

Capillaries in the lymphatic system usually drain the excess fluid but their dysfunction can lead to another serious condition: lymphedema. A new study published in The American Journal of Pathology found that deficiency in neuropilin 2 (Nrp2) receptors in vascular endothelial cells results in excessive and prolonged fluid build-up after inflammation. This discovery may guide investigators toward new pharmacological therapies for edema and lymphedema.

Currently, physicians watch and wait for lymphedema, but study suggests that treatment at the time of surgery may be a more effective course.
Advertisement
‘Edema frequently occurs in chronic inflammatory diseases including psoriasis and eczema.’

Eylea, Avastin, and Lucentis are all widely used to treat diabetic macular edema (DME), a consequence of diabetes that can cause blurring of central vision.
Advertisement
The investigators measured ear swelling in mice after topically introducing an inflammation-causing substance. Fluid retention was 2.5-fold higher in the Nrp2-deficient mice than controls. The swelling in control mice began to recede within two days of inflammation and returned to near-normal levels by four days. In contrast, the swelling in the Nrp2-deficient mice remained significantly elevated over control levels for more than 10 days.

The researchers also found that in Nrp2-mutant mice the lack of a superficial lymphatic capillary plexus causes impaired drainage of fluid. Co-investigators Patrick Mucka, MS, and Nicholas Levonyak, MS, of the Vascular Biology Program at Boston Children's Hospital, explain that the prolonged lymphedema seen in Nrp2 knockout mice may be caused by architectural defects resulting from improper lymphatic vessel sprouting during development.

Interestingly, the enhanced leakage in the Nrp2-deficient mice was associated with the loss of endogenous Sema3F activity. Sema3F competes with VEGFA for binding to Nrp2 and is therefore termed an inhibitory ligand of Nrp2. This competitive inhibition, in turn, prevents vascular permeability. Addition of exogenous Sema3F protein therefore inhibits edema.

Dr. Bielenberg encourages the pursuit of future studies on the role of the Sema3F/Nrp2 axis in chronic inflammation or lymphedema. Although these studies were performed in mice, mutations in the human NRP2 gene have been found in patients with primary lymphedema. This gene conservation suggests a high likelihood that humans and mice share a similar molecular mechanism behind this process, an encouraging indication for the translation of these findings.