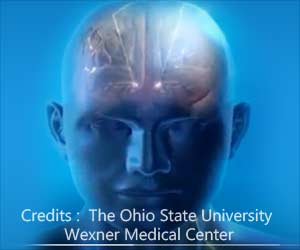 Specific signature and algorithm or the analysis of network-level brain activity can tell when a person is trying to do a cognitive task that is hard. This is an indication that electrical stimulation can give an extra push.

Approximately 1 in 5 adults in the United States experience mental illness in a given year. Severe mental illnesses cause the brain to have trouble dealing with cognitively effortful states, like focusing attention over long periods of time, discriminating between two things that are difficult to tell apart, and responding quickly to information that is coming in fast.

Advertisement
‘Severe mental illness can lead to trouble dealing with cognitive effortful states. Analysis of the network-level brain activity can tell when a patient is focused and when he is at rest, and can determine the need for brain stimulation therapies.’
Read More..

A new study, published in the Journal of Neural Engineering, could improve patients' abilities to manage symptoms of mental illness.


Previous research demonstrated that applying electrical stimulation at just the right time helps the brain of a patient with a severe mental illness work through difficult cognitive tasks. However, it was done in a laboratory setting, free from the complexities of real-world activities of daily living.
Advertisement
Senior author Alik Widge, MD, Ph.D, Assistant Professor of Psychiatry at the University of Minnesota Medical School, and investigators at Massachusetts General Hospital (MGH), consisting of researchers from Brown University and MGH, including co-senior author David Borton, PhD, Assistant Professor of Engineering at Brown University, were the first to analyze patients' brain activity to detect precisely when a patient is focused and their attention is fully devoted, compared to when he or she is 'at rest'. They studied patients who were undergoing surgery for severe epilepsy, who already had measurement electrodes in the relevant brain areas.

The study, which was part of DARPA's SUBNETS program, found that specific signatures and algorithms can be used to tell when someone is focused and really trying to do a task that is hard for them, indicating that they could benefit from an electrical stimulation to get an extra push.

The study also demonstrates that there is no single region of the brain that can tell when someone is in this focused, effortful state. In order to detect when the patient started to focus on a cognitive task, the researchers had to analyze the information at the network level. It was essential to look at how the activity of one region coordinated with the activity of another.

"Using the same neural signals that could drive adaptive deep brain stimulation, we have shown that it is possible to detect mental states that might be amenable to closed-loop control," said lead author Nicole Provenza, MS, PhD candidate, Brown University. "While further research is necessary to generalize our findings to real-world applications, we hope that this work will ultimately contribute to the development of more effective brain stimulation therapies for mental illness."

"We want to take a patient-centered approach to treating mental illness," explained Widge. "The job of a stimulator is not to take away the symptoms; its job is to help the patient manage his or her symptoms. It gives the power back to the individual and just gives them a little extra help when they need it."

There is still more work to be done, but Widge is excited to take the next step and eventually make these ideas into real products that will help people.

Depression Symptoms can be Relieved by Brain Stimulation
Brain stimulation can significantly reduce the symptoms of moderate to severe depression. ......

New Obesity Treatment: Brain Stimulation May Reduce Food Cravings
Obesity can be treated by stimulating the brain to alter its intrinsic reward system which may ......

Deep Brain Stimulation Helps Improve Treatment-resistant Anorexia
Anorexia, one of the fatal eating disorders can now be treated with deep vein stimulation that ......