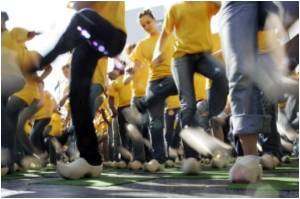 A Gallup World Poll survey has declared the Netherlands the "happiest country in the world".

They surveyed thousands of respondents in 155 countries, between 2005 and 2009, in order to measure two types of well-being.

June 18 is the Happiest Day of the Year

Dr Cliff Arnall, a former Cardiff University lecturer, has revealed that June 18 is the happiest day of this year.
Advertisement

The researchers first asked subjects to reflect on their overall satisfaction with their lives, and ranked their answers using a 'life evaluation' score from one to ten.hey later asked questions about how each subject had felt the previous day. Those answers allowed researchers to score their 'daily experiences'-things like whether they felt well rested, respected, free of pain and intellectually engaged.


Subjects that reported high scores were considered 'thriving.' The percentage of thriving individuals in each country determined the rankings.

When it comes to happiness , a new study declares, New Yorkers rank dead last having a cranky state of mind, among the 50 states of the US,reports The New York Daily News.
Advertisement
The researchers studied in the reasons why countries with high domestic product won out for well-being and found an association between life satisfaction and income.

It was found in the survey that The Netherlands, Denmark, Finland, Norway and Sweden are all clustered in the same region and all enjoy high levels of prosperity.

The 10 Happiest Places in the World

Feeling blue? Well, then all you need to do is pack your bags and select one of the happiest places on earth for the journey of a lifetime.
Advertisement
Advertisement

Euphoria is an exaggerated state of happiness and well-being that is beyond the normal emotional response ...