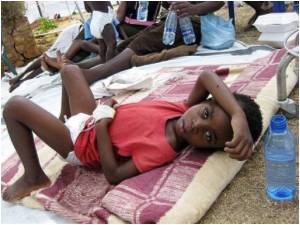 Nepal urges tourists to take precautions against cholera. 13 people died in an outbreak in the remote west of the country.

Visitors were urged by GD Thakur, director of the Himalayan nation's epidemiology and disease control department, to drink boiled or mineral water and "pay attention to their personal care and hygiene".

"There have been 13 deaths in two months in Doti district in western Nepal but now the situation is under control," Thakur said.


"For the last 15 years there have always been a few cases of cholera in Nepal in the rainy season. Since mid-April we have detected 15 cholera cases in Kathmandu but there have been no deaths."

Cuba on Saturday reported country's first cholera outbreak in 130 years, with more than 150 people affected by it.
Advertisement
Nepal is nearing the height of its monsoon season, when diarrhoea-related illnesses normally spike because of contaminated water sources.

Cholera is caused by bacteria in water or food, which has usually been contaminated with the faeces of an infected person.

If untreated it can kill within a day through dehydration, with the old and the young the most vulnerable.

Healthcare facilities in most of Nepal's western districts, including Doti, are primitive, with farm workers often living in dirty, cramped conditions without electricity or access to clean drinking water.

"Foreign visitors who plan to come to Nepal should not worry because the situation is completely under control. We request them to pay attention to their personal care and hygiene," Thakur said.

"We encourage them to drink either boiled water or mineral water and not to eat leftover food. The department is very vigilant and there is nothing to worry about."

Even as fighting continues in Somalia, the World Health Organization has warned that the population in Kismayo is struggling to cope with a cholera outbreak.
Advertisement
<< Blood Test may Predict Kidney Cancer
New Targeted Approach Promising for Treatment of Parasitic ... >>

A new study by an international team of scientists led by researchers from the Institute for Genome Sciences (IGS) at the University of Maryland School of Medicine, the Center for
Advertisement
News A-Z
A B C D E F G H I J K L M N O P Q R S T U V W X Y Z
What's New on Medindia