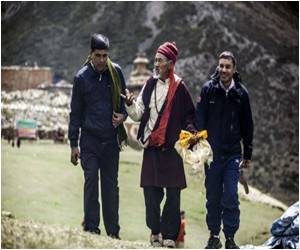 Due to water pipelines being badly damaged by the earthquake in Nepal, residents in Kathmandu are facing an extreme shortage of water with waters tankers being their only hope. Rubble in many places has restricted the movement of water tankers in many places.

Lorries are able to carry water tankers only to areas which have not been cut off. A relief worker, Ali, said that people come running at the sight of water tankers and a tank which takes hours to fill up is soon emptied.
Advertisement

"It was already a crisis here in Kathmandu to get water but now because of the earthquake it is very bad. So it is very hard to get water," said Ali.


"We are relying on water tankers. Earlier the situation wasn't this bad but it took a turn for the worse when the earthquake struck. The tankers are only able to deliver water to those areas the roads to which have not been blocked by rubble," said Divesh, a resident.
Advertisement
Efforts to step up the pace of delivery of relief material including water were stalled by a shortage of supply trucks and drivers as many of them had returned to their villages to help their families.

However, water supply in Nepal wasn't smooth even before the quake. According to the Department of Water Supply and Sewerage in Nepal, around 80% of the population has access to potable water, it is often polluted.

The government said the death toll from last Saturday's earthquake had reached 6,655 and that more than 14,000 people were injured.

Source: ANI
Advertisement
<< Astronauts Deployed on a Trip to Mars are at High Risk of De...
The Duke of Cambridge Secretly Wanted a Baby Girl Since Prin... >>

Online Application to Help 'Search and Rescue' Efforts in Earthquake-Ravaged Nepal
It helps the Nepali community across the globe to communicate with each other. Stranded tourists, .....

After the Devastating Earthquake, Fresh Tremors Jolt Nepal Yet Again
Officials said that the tremors were not part of the aftershocks that have been rattling Nepal over ...